Jay (ツバクロ, Tsubakuro?) is a jock bird villager in the Animal Crossing series. His English name is derived from the species of bird, although there are no jays that have red heads like the villager. His Japanese name, is the katakana writing of 燕 (Tsubakuro), which is the Japanese word for "Swallow" (the species of bird), it also can mean "comfort," or "enjoy." His catchphrase, "Heeeeeeyy," could be a reference to Fonzie from the show Happy Days.

He appears on the album cover for King K.K.

Jay is a bird with blue red and white feathers. His beak and legs are orangey-yellow. His tail is entirely blue. He is similar in appearance to a swallow. His eyebrows are black. He initially, carries a Yellow Umbrella on rainy days. He looks similar to Falco from Starfox.

Jay has a jock personality and has a great interest in sports and bodybuilding. Jock villagers are hyperactive and motivated but often come across as egotistical and dense. As a jock villager, Jay is very interested in his hobby, and may compete against the player at catching bugs and fish. Jock villagers get along with peppy, cranky and uchi villagers, but conflict with the laid-back lifestyle of lazy villagers. Snooty villagers may also be difficult to get along with for Jay.

Jay's house has a classical theme, with K.K. Waltz playing on his gramaphone. In Animal Crossing, Jay has the Perfect painting in his house. As shown on the side, Jay likes to collect instruments. Jay's carpet is the classic carpet and his wallpaper is the ornate wallpaper. Jay has a string set and a vibraphone. The perfect painting and the instruments are also left out in the later games.

He's not exactly brave — just empty-headed. He's the type that seems to succeed by willpower alone.

At level 7 friendship, he will reward you with a six-ball tee and sparkle stones (x1).

At level 15, he will request that you craft a skateboard rack.

At level 20, he will reward you with pic of Jay and sparkle stones (x1). 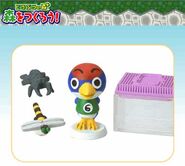 Jay appears in this "bug catching" play set with the tarantula and the banded dragonfly, along with a pink box.

Jay's E-Reader Card
Add a photo to this gallery
Retrieved from "https://animalcrossing.fandom.com/wiki/Jay?oldid=400286"
Community content is available under CC-BY-SA unless otherwise noted.