View source
watch 01:01
What are Jocks?
Do you like this video?
Play Sound

Jock villagers (ハキハキ hakihaki, or オイラ oira) (also called sporty or athletic) are male villagers in the Animal Crossing series. Hakihaki is a Japanese onomatopoeic or mimetic word meaning, briskly, promptly, clearly or lucidly. The English term Jock comes from old Gaelic "eachaidhe" (YACH-ee-yuh, horseman) which is where we get the term "jockey." As the word/name derived from a sportsman title, the term "jock" was loosely affiliated with specifically any male (Jock, Jack, Jacque, etc) of a sporty or athletic nature. The term in reference to the American stereotype still centers around male athletes, which, due the degree of commercialism centered around sports in American society, are typically rewarded for centering their focus more towards athletic training rather than academic pursuits. As a result, they're often depicted as unintelligent or dull-witted, which is reflected in the Animal Crossing personality type by their keen interests in physical fitness and sports, including wrestling and typical gym exercises such as leg-squats and push-ups. These interests are unseen in the game, like the other hobbies.

The name hakihaki is referenced in Wild World's game files and is the romanization of the Japanese word ハキハキ. Jock villagers aren't referred to in any other way by Nintendo. They are a starting villager personality in New Horizons.

Jock villagers are obsessed with sports, talking frequently about their physical appearance and sporting progress and occasionally gossip. They brag quite a bit, usually about working out. They would encourage the player when given tasks and other things. Stereotypically, they are also not very smart, incessantly confusing themselves - calling the brain "the Brian", saying they're in a "punch" instead of pinch and failing to even grasp the concept of the game 'rock, paper, scissors'. Also, they rarely talk about fashion, although they are somewhat similar to snooty villagers.

They are the brother-like characters in the game, giving pep talks to the player and appearing competitive towards them and other villagers when they partake in town events. In the original Animal Crossing, they go to sleep at 1:00 AM and wake up at 5:30 AM. In Wild World and City Folk, they usually go to sleep at 2:00 AM and wake up at 6:30. In New Leaf, they go to sleep at 12:00 AM and wake up at 7:00 AM. In New Horizons, they sleep between 12:30AM and 6:30AM. They are rarely angry unless pushed too far, repeatedly hit with a net or toy hammer, or by falling into a pitfall. They can also be offended by others, particularly by lazy villagers, with whom they have conflicting personalities. A discussion between the lazy and jock villager will leave the jock villager confused and unable to talk. When jock villagers get sad, they say something like "I'm just sweating through my eyes!". When at the player's house, they will often say something like, "We have the same taste in sportswear!" When in the Roost, They say they "get totally sleepy" whenever they look at the owner. Jock villagers in Pocket Camp will occasionally call the player "Brosephine", which can be confused with their catchphrase due to them saying it a lot. In New Horizons, they can often be found performing exercises, which involves carrying dumbbells and stretching.

Jock villagers easily get along with peppy, sisterly, normal, and other jock villagers. They have trouble getting along with the previously mentioned snooty, cranky and lazy villagers, sometimes even getting angry and annoyed during conversations with them.

Jock Villagers are considered the male equivalents of Peppy villagers; they use stereotypical slang words/phrases, are energetic, and somewhat immature.

Below are some (not all) quotes made by jock villagers.

"I'm so tired today... The 10,000 squats I've done since this morning have really caught up with me. Hey! <player>! Act like you're in charge, and get me some supplies, will ya? Nothing hits the spot like fruit when you're tired! Any kind will do! Can you get me some?" [Leave it to me!] "Wow! You're a real stand-up guy, you know that, <player>? I'll be waiting for you!"

Upon talking to villager:

When talked to again:

The following is a list of villagers who have the jock personality in their latest installments of the Animal Crossing series games. 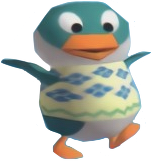 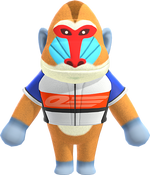 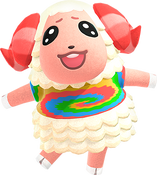 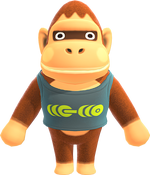 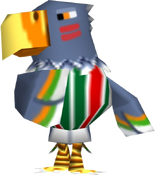