Kaitlin (おかあさん, Okaa-san?, Mother) is a mother cat. Katie is her daughter. She appears after the player has visited one of their friend's town. She will tell the player that she is missing her daughter, Katie, and believes she may have been left in another town. The player should then open their town gates, where a friend will have escorted Katie to the player's town and reunite Katie to Kaitlin.

They will be reunited and, a day later, the friend will receive a thank you gift. However, the original player will receive nothing.

Kaitlin looks nearly identical to her daughter, but wears a green apron with a fish on it and has red lips. Kaitlin has two eyelashes on each eye, instead of one like her daughter.

Kaitlin talking with a player.

Kaitlin being reunited with Katie. 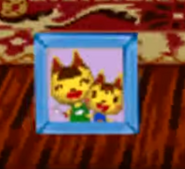 Retrieved from "https://animalcrossing.fandom.com/wiki/Kaitlin?oldid=398890"
Community content is available under CC-BY-SA unless otherwise noted.