“And remember that bad times... are just times that are bad.”
― Katrina, New Leaf

Katrina (ハッケミィ, Hakkemī?) is the fortune teller in the Animal Crossing series. Her English name is a pun on "cat" while also alluding to the real life name of the same spelling. Her German name comes from Esmeralda. Katrina is the only panther in the series.

Katrina is a navy blue panther, with violet eyeshadow and bright almond shaped orange eyes. She tells the player their fortune and appears in all of the games in the Animal Crossing series. She has a male voice like Gracie and Saharah (who are both male in Japan), but in Wild World, City Folk, and New Leaf she has the voice of a normal villager.

Some villagers, especially cranky villagers sometimes speculate that Katrina works illegally (like Redd). Her shop in City Folk is hidden away like Redd's tent which is covered in ivy, and has a poster covering the only window so whatever is inside cannot be seen.

Katrina's tent will appear outside on a random day of the week in a random acre. If the player speaks to Copper, he will tell them which acre she is in. She can tell the player their fortune for 100 Bells. Her tent is red, green, and gold on the outside, and dark purple on the inside. She stands behind a purple desk that has cards, a crystal ball, some bells, and two small flaming torches. Katrina appears with the same role as in Animal Crossing.

In Animal Crossing Katrina has an identical role to Animal Forest. However, her service now only costs 50 Bells instead of 100.

Katrina's tent will appear randomly in front of Town Hall once a month. She can tell the player their fortune for 100 Bells. She can tell them what will happen tomorrow. The player can also have their spirit cleansed for 10,000 Bells, which stops them from tripping over. Her tent is open from 9:00 A.M. to 9:00 P.M.

Katrina can be found in the city in the building furthest to the right. If the player has inputted their birthday, she will greet them by the player's zodiac sign. She can tell the player their fortune, which can last a week, and/or she can give the player a charm for that month, usually involving strange tasks. However, the player who is given the fortune cannot obtain the charm -- the task stated by Katrina needs to be done by a visiting player and that visitor will obtain the charm. No matter what the player asks her to do, she will always have a heavy item such as an anvil or wash pail drop on their head. It will make the player character wobble, be dizzy, and have stars flying around their head.

Sometimes, jock villagers will say walking into her shop is scarier than doing a 360 on a skateboard.

Katrina returns to having a tent once again, and can be found at the Plaza. Katrina will tell the player a fortune for 500 Bells. When telling a fortune, her tent disappears and she and the recipient are surrounded by stars, or what Katrina calls the Star Matrix. After having received 20 fortunes, the Fortune Shop will be available as a Public Works Project where the Fortune Shop will be built next to the Dream Suite in Main Street, where the player is able to get to Katrina more frequently, as in her tent she is only available once a week.

The below fortunes are the responses given by Katrina to the player.

Katrina as she appears in Animal Crossing. 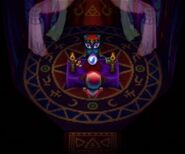 Katrina Smash Bros Trophy
Add a photo to this gallery

Katrina as she appeared in City Folk. 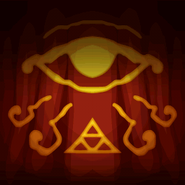 The Triforce-like emblem inside her tent. 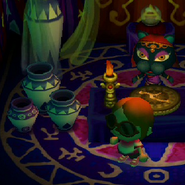 The familiar pots, similar to ones present in The Wind Waker.
Add a photo to this gallery 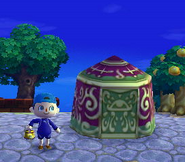 The player kneels down when having their fortune told.

A cutscene is played after she finishes chanting.

The player trips when they have bad luck.
Add a photo to this gallery

Retrieved from "https://animalcrossing.fandom.com/wiki/Katrina?oldid=395872"
Community content is available under CC-BY-SA unless otherwise noted.