This article is about the character. For the store, see Kicks (store).

Mocha,
None at all,
One spoonful of sugar

Kicks (シャンク, Shanku?, Shank) is a character introduced in City Folk. He is a male skunk, who, in City Folk, shines shoes for a living in the city on fair weather days. He can be found outside the run-down building between Lloid's auction house and Shampoodle. This building used to be owned by Brewster, as he reveals when he says he used to own a place in the city that did bad business and is boarded up now. In New Leaf, he runs a shoe shop named Kicks, which sells both shoes and socks. In New Horizons, Kicks begins making weekly visits to the Deserted Island after the Able Sisters shop has been built, and sells a selection of rare shoes, socks, and bags.

Kicks is a skunk. His fur is black with white and light blue lines running down from his nose to his tail. His eyes are dark purple and he has a light pink nose. For apparel, he wears a brown hat, along with brown suspenders, and brown boot-like shoes.

In New Leaf, he wears a buttoned-up, white dress shirt as his outfit.

If the player buys his services for 500 Bells, Kicks' shoe-shine will change the colour of the player's shoes to match their hair or outfit (not including pattern-made shirts which produce the defaults). If the shoes do not change colours, Kicks will not charge for his services.

There are only a select number of shoe patterns which can match each hair and outfit combo. Kicks will only come on fair weather days, and even if the player time travels, Kicks will still appear. The player's shoes' appearance can only be changed once a day and affects Gracie's appraisal. He will sometimes ask if the player would like a masculine or feminine shine.

Kicks owns his own store, which is also called Kicks. It can be constructed in the player's town by spending 8,000 Bells in the Able Sisters' store. Once bought, it will take three days to build and will be built next door to the Able Sisters'.

The player can buy shoes and socks to further customize their outfit. In previous games, the player can only change the color or style of shoes to match an outfit.

Kicks is a playable character in amiibo Festival, available when the Kicks amiibo is scanned on the Wii U. Sometimes when the player playing as Kicks lands on an event square in the Amiibo Festival Board Game mode, a random event specifically related to Kicks may appear.

Kicks has 6 unlockable costumes for the game, unlocked through leveling up the Kicks amiibo:

Kicks occasionally appears in the Market Place, selling socks and shoes for the player to purchase.

Kicks appears in the Resident Services plaza once per week as a traveling peddler after the player constructs the Able Sisters shop on their island. He sells shoes, socks, and bags, and offers his services from 5am to 10pm. 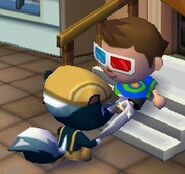 Kicks
Add a photo to this gallery

Kicks welcoming the player to his store for the first time.

A player purchasing an item from his store.

Kicks reminiscences his days as a city go-er.

Kicks amiibo
Add a photo to this gallery

Kick's PC Icon
Add a photo to this gallery

Retrieved from "https://animalcrossing.fandom.com/wiki/Kicks?oldid=457547"
Community content is available under CC-BY-SA unless otherwise noted.