Lazy villagers (ぼく Boku, or ぼんやり Bonyari) (sometimes called relaxed, doofus, or food-loving villagers) are male characters in the Animal Crossing series. The name refers to their calm, laid-back lifestyle as well as their hospitable nature and love of food. As of now, there are 73 lazy villagers.

There are currently five villagers who changed from lazy to another personality, making it the personality that has lost the most villagers. Dobie and T-Bone, who changed from lazy to cranky, and Huck and Kidd who instead turned into a smug since New Leaf. Roswell (formerly known as Pironkon) also became a smug villager upon his return in New Horizons. There are currently no instances of villagers changing to lazy.

Lazy villagers have a relaxed, easygoing, and naïve approach to living in the town. They are generally friendly and hospitable when interacting with the player and other villagers, they are fairly confident in themselves and their lifestyle.

In the original games, lazy villagers were characterised as hospitable elders whose silliness and laziness was due to their age, hence why more elderly looking villagers such as the arforementioned Dobie and T-Bone used to be Lazy. In later games, this personality recieved a different interpretation, with them being framed as the youngest type of villager and loving sleeping and eating. To account for this, some villagers who remained lazy, such as Doc, received minor redesigns so as not to look old.

In Wild World, they may mention reading an unseen magazine, called "Chillin' Magazine", which also reflects on their chilled, relaxed lifestyle. They often mention theories relating to certain aspects of the town, which they will mention in conversation to the player or other villagers. For example, some lazy villagers will wonder aloud who has to sit inside the Tom Nook Point System to make it talk.

Often, they will mention their beliefs that Tom Nook's store has a basement filled with Tom Nook stuffed animals. They often express a fascination with Tom Nook's fluffy tail, and will sometimes ask for copies of the unseen comic, Bagel Boy. They talk about doing hobbies including fishing, bug catching, fossil digging, planting flowers, and having good fashion. Lazy villagers will often ask you to catch a bug or dig a fossil etc. depending on what hobby they like to do at the time. Once you become good friends with a lazy villager, they will tell you their made-up stories usually relating to the player, like in dreams. Other times they will not tell you their stories because they fear you would not like them. They do not take insults most of the time but sometimes they can, though they are very friendly and open minded. They also tend to dramatize when sick, and they often pronounce 'medicine' as 'bedicine'. They will also sometimes make suggestive phrases to the player, or say "Ah huh huh huh! That's why they call me <villager's name> the romantic!"

Ducks of a lazy personality have a tendency to ask if the player wants to hear a scary story. Of course, this is common with other species of lazy villagers as well, but if the player says yes, they will tell them the mayor's favorite food is Peking duck.

In New Leaf, if a lazy villager is visiting the player's town as a camper, they will mention how good the local fruit is.

In New Horizons, lazy villagers will talk about the bugs living in the walls of their house about as often as they talk about food.

Below are some (not all) quotes made by lazy villagers

When Giving a Gift

When Starting a Conversation

When Visiting the Player’s House Unannounced

The following is a list of villagers who have the lazy personality in their latest installments of the Animal Crossing series games. 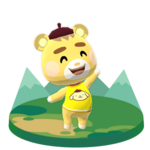