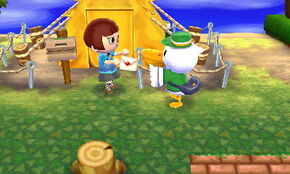 AF, AF+, AC, AFe+, WW, CF, NL, NH
Letters are a form of communication in the Animal Crossing series. It is present in all main series games, but absent from spin-off titles such as Happy Home Designer. Players have the ability to send letters to villagers, other players, the player's future self, and the Farway Museum, and players may receive letters from villagers, other players, some special characters, Nintendo, and other entities, such as the Happy Home Academy.

In all games up to New Leaf, the player is required to write a letter to one of their villagers during their Part Time Job with Tom Nook. This is used to teach the player how to write and send letters. Additionally, the player will then visit that Villager in a later task, who will comment on the letter that was sent, showing that the villagers can be influenced by them.

To mail the letter, the player must then take the written letter to Pelly or Phyllis in either the Post Office (Animal Forest, Animal Crossing, New Leaf), or the Town Hall (Wild World, City Folk).

In New Horizons the process for sending letters was streamlined. The player no longer buys stationery in packets, nor do they have to deliver it to Pelly or Phyllis. Letters are available from the card stand in the Airport. For 200 Bells a letter, the player can choose from a list of design options, once the letter is written it is mailed automatically. Some of the design options are only available for a limited amount of time, and will no longer be available after a listed date. The same options are available for recipients as past games, with a notable addition: players from other Islands who are on the player's friend list (requires that both have an active Nintendo Online Subscription).

Letters in Animal Forest, Animal Crossing, City Folk, New Leaf, and New Horizons have six lines on which a message can be written whereas Wild World only has four. Each letter begins with the a greeting and the recipient's name and ends with the author's name and signature. Villagers will notice spelling errors the player makes and may comment on them negatively if the letter comes up in conversation later.

The player can attach a gift to the present in the inventory screen, or while reviewing the letter (New Horizons only). Attaching gifts increases the amount of Friendship gained with a villager recipient. Additionally, gifts may be wrapped with Wrapping Paper for an even larger gain.

Letters will be received in the mailbox outside the player's house at the start of each day, 6 AM (5 AM in New Horizons). Letters can be received from villagers, other players, some special characters such as the player's parents and Jack, businesses, Nintendo, and other entities such as the Happy Home Academy and the Faraway Museum.

Letters the player receives can either be tossed or stored via a storage system offered in either the Post Office (Animal Forest, Animal Crossing, New Leaf), Town Hall (Wild World, City Folk), or mailbox (New Horizons).

If you time travel to receive letters in New Horizons, note that if letters from friends are sent to you they will appear in your mailbox alongside all the other normal letters so as long as that friends sent it you can quickly get it by time travelling to the next day.

A letter from Tangy with a present attached

A letter from mom.

A goodbye letter from Julian with his picture

A letter from Elvis, telling the player about his birthday

The player writing a letter to Whitney

A letter from Gabi

A goodbye letter from Robin, with her picture

Orville next to the Card Stand in Dodo Airlines

Screenshot showing a selection of Cards, including Limited ones.