Lottie (タクミ, Takumi?) is a character that made her first appearance in Happy Home Designer. She is Lyle's niece, and has her own amiibo figurine. Lottie will be at Nook's Homes to help the player out on their first day, having them design her room as practice. Afterwards, she helps the player take on their first client. She also has a huge crush on Digby.

When the player is done with their first client, Lottie allows them to go outside of Nook's Homes to scout clients out for themselves.

Lottie also introduces all the new items the player can use slowly. She is the one that introduces anything and explains it all. On some days—usually when the player starts playing the game later in the day—Lottie will have small black eyes with no eyelashes, and a greyish purple bow instead of a bright blue one, as well as dark blue shoes. She tells the player not to look at her, for she doesn't have makeup on because she woke up late and didn't have time to put it on, and she says she only wears makeup to impress Digby.

Lottie was added to New Leaf in the Welcome amiibo update. She gives the player a Nook's Homes model if you own Happy Home Designer. She also gives the player a tutorial on moving furniture via the touchscreen after the secret storage room has been added. 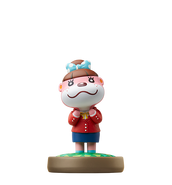 Lottie in ACNL: Welcome Amiibo update
Add a photo to this gallery

Retrieved from "https://animalcrossing.fandom.com/wiki/Lottie?oldid=396497"
Community content is available under CC-BY-SA unless otherwise noted.