WW, CF, NL, HHD, PC, Geijōban Dōbutsu no Mori
Lyle (ホンマさん, Honma-san?) is the insurance agent that appears in games from Wild World onward. He works as an insurance agent in Wild World, selling insurance and giving refunds on forged paintings and other misfortunes. In City Folk, he works for the Happy Room Academy. In New Leaf, he works for the Happy Home Academy. In Happy Home Designer, he and his niece Lottie now work for Nook's Homes. In Pocket Camp, he once again returns to working for the HHA, but this time as a Happy Homeroom Judge.

Lyle is an otter with blue-gray skin and a white muzzle and chest. He has small, circular eyes with black irises, and his cheeks have small freckles, he also has long whiskers.

In Wild World, his apparel consists of a brown suit and large, horn-rimmed glasses, and he is seen carrying a briefcase. In City Folk and New Leaf, he holds a black folder instead. He wears a Happy Room Academy uniform that consists of a dark red blazer over a white shirt and yellow necktie, with gray pants and brown shoes. He also wears this uniform in New Leaf as a representative of the Happy Home Academy.

Lyle makes his first appearance in Wild World working as an insurance salesman. He appears every Saturday outside the player's house to issue a survey. He will follow the player quite persistently if his request is not met. The survey will initiate a "health insurance policy" once completed. By paying 3,000 Bells the player will receive insurance.

Insurance grants 100 Bells in the mail for each misfortune. Misfortunes include tripping, being stung by bees, or receiving counterfeit paintings (the latter after his second visit). The 100 Bells bonus can only be received once per day. A further payment of 6,000 Bells on the following Saturday will result in the player receiving compensation of 100 Bells if they buy a counterfeit painting, but only if the painting itself is presented to Lyle in person.

Normal villagers sometimes warn of a health insurance scam operating in the area, which is most likely a reference to Lyle. Some jock villagers talk about "muscle insurance".

It is implied in-game that Lyle has connections with Redd, as during the survey he will ask the player which day is optimal for Redd to show up (without directly mentioning Redd). 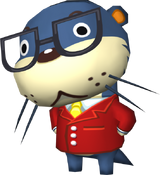 Lyle appears to have a more respectable job in City Folk, working in the Happy Room Academy Headquarters in the City. He will mention how much he hates his new job, and frequently talks of his old, "high-flying" lifestyle. He seems to be calmer, but this may only be to fit in with his new 'happy' job. He only references "bustin' [his] chops" once, if the player refuses to join the HRA.

When talked to, his persistent nature leads him to continue talking with the player until they agree to join the Happy Room Academy. An advert for the HRA, with his picture on it, can be seen in the bus, behind Kapp'n's seat.

He makes no reference to his past lifestyle in Wild World other than his frequent complaints and mentions of his old office when the player first talks to him. He does not talk about Redd or Crazy Redd's, which is located nearby, despite the implications in Wild World that they were connected. Lyle no longer visits the Roost in City Folk.

At the Happy Room Academy Headquarters, the player can also speak with Lyle in order to find out their current "HRA evaluation" or to stop the weekly flow of evaluation letters. When the player asks about their latest evaluation, he will tell the player how many points they've earned for their house (this will also be mentioned in a letter the player receives after evaluation day).

It is suggested that he may have once been a grave-digger or fossil hunter, because if the player's house becomes the model room and has a particularly valuable fossil in it, Lyle will mention that he used to dig up bones in "the yard...Not the backyard, the other yard...". This may also reference grave robbery, given Lyle's shady past.

Lyle returns in New Leaf. He works with Tom Nook in his real estate agency, Nook's Homes. He is in charge of the Happy Home Academy aspect of the business and seems to enjoy his job more than he did in City Folk. He is more all-around pleasant, although he still makes a few side complaints about his co-workers being annoying. Every so often, when the player comes to ask about their home evaluation, the player is given the option of asking Lyle, "What's new?". If this option is selected, Lyle will proceed to tell the player about his interactions with other store owners on main street, such as Leif and the Able Sisters (he also may hint towards the relationship between the Able Sisters and Tom Nook). This function replaces the "episodes" that were removed as of New Leaf.

Lyle also appears on a Happy Home Academy advertisement that occasionally is displayed on the Video Screen public works project.

Lyle makes a small appearance in Geijōban Dōbutsu no Mori. He is seen in the audience of K.K. Slider's performance at the Fireworks Festival. He wears the same suit as he does in Wild World. He does not talk and makes no other appearance in the film.

In Happy Home Designer, Lyle is still working at Nook's Homes. His niece, Lottie, is also working there now. Though he is prominent in the beginning of the game and sets up the amiibo Phone, afterwards he has a minor role in the game, and remains on the second floor area of Nook's Homes. If the player speaks to him, he will offer them helpful tips.

He also can be called via the amiibo Phone for the player to design his home. The player can also invite him to other character's homes via his amibo Card.

In New Horizons, Lyle does not make an appearance physically in game. However, he will still send the player HHA mail regarding the rating of their home. Similar to previous games, villagers will discuss when Lyle will be evaluating homes days prior.

In the game's final major update, however, Lyle makes physical appearances, under certain circumstances. Much like many of the other missing characters from the game, scanning in the Lyle amiibo card in The Roost will allow you to physically see him, sitting with Tom Nook, Lottie, and Digby.

In the New Horizons purchasable DLC, once the player unlocks the ability to invite a VIP clients via the amiibo scanner, when scanning in a Lyle amiibo card, the player will be able to design a vacation home for him. Notably, Lyle sports his exact same attire from Happy Home Designer, that being his Happy Home Academy uniform, but the player cannot make him wear a different shirt, and cannot even purchase the uniform.