Mabel Able (きぬよ, Kinuyo?) is a special character in the Animal Crossing series, co-owning the Able Sisters tailor shop with her older sister, Sable. She is the more charismatic of the two sisters and assists customers with their purchases. Mabel chastises Sable when she offends the player or refuses to talk to them.

Mabel is a blue hedgehog with brown-orange cheeks and black eyes, eyebrows, and nose. Like her sister, she has no visible mouth, and instead visibly talks by moving her nose. She wears a white and green gingham apron (her favorite pattern) and has a head full of large, spiky bristles.

She does not directly speak about her past; it is only told by Sable once the player befriends her. She may bicker from time to time with Sable (mostly about who does most of the work within the business). She rarely mentions her parents, but from what is learned through Sable, she was too young to know who they were at the time of the car crash which killed them. She was raised by her sister, from the time she was an infant.

In Animal Crossing and Wild World

Mabel works at the shop Able Sisters, along with her older sister Sable, as a store clerk. She helps the player design clothing patterns and sells the player clothes, umbrellas, and accessories.

In January, Sable will get depressed, much to Mabel's bewilderment. Eventually, after talking to Sable enough during the month, she reveals a huge secret: she and Tom Nook were best friends before he moved to the city. Naturally, due to Mabel's age, she knows little of the subject but does have experiences that include the subjects. The following can be matched with Sable's statements (to get an accurate picture):

Her role in City Folk is virtually unchanged; she now assists the player with making PRO designs. When talking to her, she soon learns that she may, in fact, have an older sister called Labelle, a worker in GracieGrace - a store in the city. Mabel has no contact with Labelle, due to her having an argument with Sable, who felt she abandoned the family when the parents died. Mabel wishes to get them talking again.

Like many other special visitors and characters, Mabel appears in Dōbutsu no Mori alongside Sable in the Able Sisters store. She has a minor role in the film, only appearing when Ai, the main character, enters the store to deliver a few boxes from Tom Nook.

Mabel is initially met when Nook's Cranny is completed, talking to Timmy and Tommy. From then on, she can be met once a week in the plaza, running a small clothing shop. Upon her third visit, she will ask the player about opening the Able Sisters shop on the island. When complete, she runs the shop with her sister Sable.

Mabel, as she appeared in Wild World.

Mabel in the Able Sisters.
Add a photo to this gallery

Mabel, as she appeared in City Folk.

Mabel and her sister Sable in a conversation.

Mable's PC Icon
Add a photo to this gallery 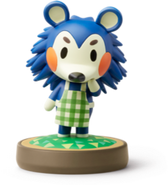 Mabel's Amiibo
Add a photo to this gallery

Retrieved from "https://animalcrossing.fandom.com/wiki/Mabel?oldid=442782"
Community content is available under CC-BY-SA unless otherwise noted.