The map is a key item in the Animal Crossing series. The map shows the location of any buildings in a town, as well as features such as the river or ocean. Upon arrival at a friend's town, a player is automatically given the map for that town.

The map will also show geographical features in the town including rivers, cliffs, and the ocean. However, it does not show the location of villagers or collectable bugs and fish. When a villager moves in to the town, the map will automatically update with their house's location, so the player can quickly find it to welcome the new resident.

In Animal Forest and Animal Crossing, the player will get it while working part time for Tom Nook, and will be allowed to keep it through the whole game. Before this point the player is forced to use the map outside the train station or police station.

In Wild World, Pelly or Phyllis will show the player how to access the map in the Town Hall after arriving. The map will show where the buildings and geographical features are. There will be an actual list of each building on the side of the map.

In City Folk, the map is given to the player by Rover on the bus ride into town. The map can be opened two ways, either by pointing the Wii Remote at the screen and clicking on the house icon, or by pressing the d-pad (+) button on the remote to open the pockets. 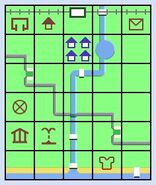 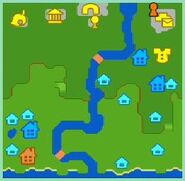 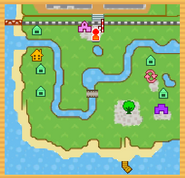 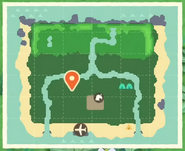 The Map in New Horizons
Community content is available under CC-BY-SA unless otherwise noted.
Advertisement