This article is about the normal elephant. For the normal squirrel, see Sally.


Margie (サリー, Sarī?, Sally) is an elephant villager with a normal personality from the Animal Crossing series. As well as appearing as a villager in Animal Forest e+, Wild World, and City Folk, she appears in Geijōban Dōbutsu no Mori by the name of Sally (Japanese name), who is an aspiring fashion designer and is best friends with Ai. She reappeared in New Leaf. Her initial phrase is a reference to the sounds an elephant makes. Her Japanese name refers to the Indian dress, Sari, and there are elephants in India, which relate to her species.

She is featured on the covers of K.K. Oasis and Mountain Song.

She has the education hobby.

Margie is a white elephant with her hands and feet having multiple colors. From bottom to top, the colors are light pink, dark pink, white, yellow, and red. She has yellow and orange hair, which is also on the tip of her ears. She has pink blush on her cheeks and blue eyes above slightly. Margie's initial shirt is a Hot Spring Shirt which she wears when she first gets into town. She resembles a parade/carnival elephant because of her colorful headdress and elaborate eyes. She has a slight resemblance to Tia, another elephant.

Margie has a normal personality, and frequently acts kind towards the player. Normal villagers generally get along well with lazy, peppy, smug, snooty and other normal villagers. Margie may conflict with cranky and sisterly villagers. As a normal villager, Margie will usually wake up at 6:00 am and is easier to befriend than most. Both normal and peppy villagers reference an unseen friend known as Moppina.

In Animal Forest e+, Margie's house is identical to Chico's, only that she has the Mosaic Wall and the Exquisite Rug. K.K. Bossa is played on a Reel-to-Reel with one gyroid, the Timpanoid. She owns a house plant as well as two vases. She owns many items from the Exotic series, including an exotic chest, exotic bureau, exotic bench, and exotic end table, on which a ponderosa bonsai sits. She also owns a djimbe drum.

in New Leaf, Margie's house is similar but not identical to her house in Animal Forest e+. She has the Persian wall and Mosaic tile. rather than the exotic series, she now own multiple items from the Cabana series, including the Cabana bed, Cabana screen, Cabana bookcase, and Cabana table, on which there is an Incense burner. She does own an Exotic bench, however. Rather than a drum, she now owns a Sitar and a Harp. She owns a vase and a Lady palm. K.K. Bossa plays on a Turntable.

Margie was added to Pocket Camp in the March 7, 2018 update.

Margie's preferred theme is harmonious, and she primarily gives steel as a reward. Her profile reads:

❝ Margie is always the most cheerful, relaxed person. It's like she's constantly in vacation mode! ...Which probably explains why she's never actually gone on one.❞ 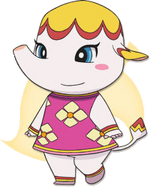 Margie appears in Dōubutsu no Mori. She is shown to be shy, and aspires to become a fashion designer. Ai, Rosie, and Alfonso befriend her. Similarly to how the song K.K. Bossa is her favorite song in-games, she requests the song K.K. Bossa at K.K. Slider's performance. She eventually moves away to pursue her dream, but remains friends with Ai through letters and sending her cherry pie.

She was voiced by Fumiko Orikasa.

Translation of E-Card (Back)