http://mariokart8.nintendo.com/
Mario Kart 8 is a kart racing game in the Mario Kart series, published by Nintendo for the Wii U. It was released in all regions in May 2014.

On August 26, 2014, an Animal Crossing series-themed DLC was announced on the Nintendo UK online store. It was released on April 23, 2015. Isabelle and the Villager are playable characters, a new track based on the Animal Crossing universe, and seven other tracks are unlocked. Both the male and female villager can be chosen by following the same drop-down menu that Yoshi and Shy Guy have received.

An Animal Crossing themed track is included as part of the second pack. Like a real Animal Crossing town, the seasons will change in the track. Every time the track is played, it will have a different season theme, which changes the color of trees, grass, snow cover, etc., just like in an actual town. The season can be manually chosen in single player by holding down the L, R, ZL, and ZR buttons while selecting the course, which will change the track to Spring, Summer, Fall, and Winter respectively. The traditional 10 Coins used to get a slight speed increase get changed to Bells. Many characters and villagers appear along the side of the track including Bob, Caroline, Filbert, Joey, Lobo, Maelle, Peanut, Pecan, Poppy, Rosie, Static, Teddy, and the Able Sisters. K.K. Slider is seen playing his guitar by the side of the road, and Mr. Resetti appears as a track hazard by digging up from underground and causing any players who hit him to spin out. Though the racers are rather tiny in comparison to the villagers. This is in order to make the villagers easier to notice.

Mario Kart 8 Deluxe is a port of Mario Kart 8 for the Nintendo Switch. It includes new battle stages and new characters, as well as various other tweaks and balance improvements. It was released on April 28th, 2017.

Mario Kart 8 has received highly positive reviews, with Nintendo reporting the "strongest review scores in franchise history", and scoring 88/100 on Metacritic and 88.52% on GameRankings as of July 10, 2014. Critics have praised Mario Kart 8 for its "exquisite details", vast sense of scale, orchestrated soundtrack, and gameplay. 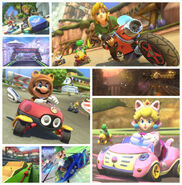 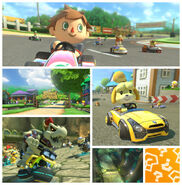 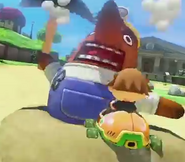 Resetti appears as a track hazard. 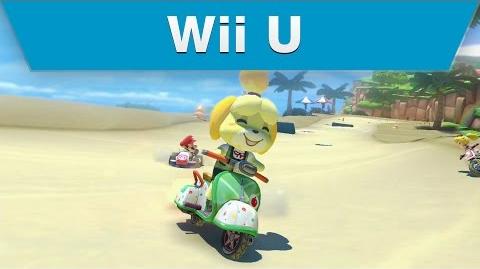 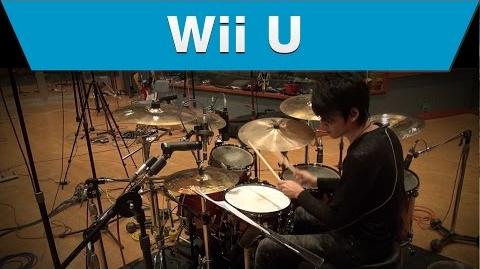