View source
watch 02:40
World of Warcraft: Dragonflight - The Loop
Do you like this video?
Play Sound

This article is about the role of the Mayor in Animal Crossing: New Leaf. For the Mayor in other games, see Mayor Tortimer.

New Leaf
The Mayor is another name for the first player character, that arrives into Town in New Leaf, They are usually addressed by this title by other villagers or characters in and around the Town. The Mayor is assisted by Isabelle.

There are two main roles for the Mayor in New Leaf. They can enact a Town Ordinance and commission and Public Works Projects to customize and improve the Town. These are managed through the Town Hall in the Mayor's Office.

To access the options, the player must sit down in the Mayor's Chair behind Isabelle. Isabelle will walk up to the Mayor to give them their tasks.

The first character created is made the mayor. Other incoming player characters will become normal residents to the town, providing regular Animal Crossing gameplay. However, the mayor cannot demolish their own home (delete character) or move to other towns (character transfer).

The day after the player assumes the position of Mayor, they can begin to take on mayoral duties: creating public works projects and enacting ordinances. In order to propose public works projects and develop the town, the Mayor must first acquire a Development Permit. This permit can only be granted once the Mayor owns a house and their approval rating reaches 100%. Upon meeting both requirements, the permit is awarded the following day by sitting in the Mayor's chair and speaking to Isabelle. 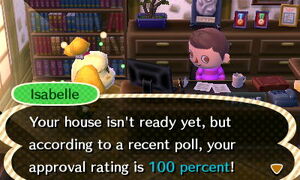 Once the permit is acquired, the approval rating is no longer an option.

These Projects allow the Mayor to customize their Town by either adding new buildings or upgrading existing ones, or by placing landmarks and features in areas around the Village or in Main Street.

Only one Project can be in progress at any given time. After it is completed, a celebration will occur with villagers present and Isabelle announcing the completed project, if the player chose to attend.

There are four ordinances in total:

The Mayor can also change the town flag, the town tune, or reset unwanted or defamatory catchphrases. These options can be accessed by speaking to Isabelle at the Town Hall's front desk.

A mayor sitting in his chair

Isabelle talking to the mayor
Español
Community content is available under CC-BY-SA unless otherwise noted.
Advertisement