The Megaphone is a tool in the Animal Crossing series, making its first appearance in Animal Crossing: New Leaf. It uses voice recognition by using the microphone on the 3DS to call villagers and characters in the town, helping the player to find them.

The megaphone will not work if the villager being called is inside a building or during local/online play. When the player does the former, a blurb that reads "No reply... Maybe they aren't nearby?" will appear. The player cannot use the Megaphone in Main Street.

It can also be used to wake up Gulliver if he is found on the beach. The player must be near Gulliver for him to respond. If the player calls Gulliver's name while away from the beach, it will say "No response" if he is awake, he will say "Oy?! Yeah?!".

In New Horizons, all it does is play a small animation of the player.

In New Leaf, the megaphone can be obtained by purchasing it at one of the Nookling Stores for 500 Bells, excluding Nookling Junction. In New Horizons, it was available through January 15th to February 15th and was on the Nook Shopping app.

Replies to Megaphone (New Leaf only) 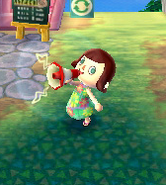 A player using a megaphone.

A player talking to Tommy, who is describing a use for it.

The player waking up Gulliver with the Megaphone.

If a player calls out a villager's name too close to them, they will get shocked and eventually get sad or mad, like Maelle as an example.