Animal Crossing merchandise has been available since the very beginning of the Animal Crossing series. There is a wide variety of items, from plush toys, figurines, lunch boxes and many more. Many of the plush toys are made by Tomy Ltd., a children's entertainment and toy manufacturer based in Japan,[1] who have also supplied fans of Nintendo games with plush toys of the popular Nintendogs series. Another company that mass produces Animal Crossing plushes is Little Buddy LLC, who also make many other Nintendo plush toys.

There is a wide range of Animal Crossing merchandise available. Below is a list of a few different types:

Animal Crossing has also appeared in third party products, such as Monopoly's 2010 Nintendo Collector's Edition which features Rosie, K.K. Slider and Tom Nook, all of whom appear alongside other famous Nintendo characters like Mario.

Below are a few examples of the merchandise available.

A plush of K.K. Slider with his guitar. 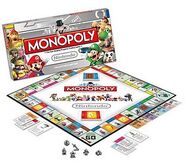 A toy set of the Lovely Series and a few Animal Crossing characters.

A plastic figurine that is similar in style to the Wild World box art. 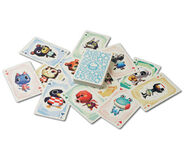 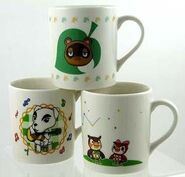 Animal Crossing mugs with characters from the movie printed on the side. 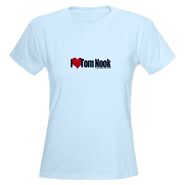 A T-shirt with 'I ♥ Tom Nook' printed on the front.

A purse with Peanut's face printed on the front. 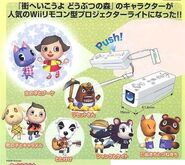 An advert for the Animal Crossing Key Chain Projectors

Timmy & Tommy plush, produced by Little Buddy
Add a photo to this gallery

This article is a stub. You can help Animal Crossing Wiki by expanding it.
Retrieved from "https://animalcrossing.fandom.com/wiki/Merchandise?oldid=419430"
Community content is available under CC-BY-SA unless otherwise noted.