Merry (さっち, Sacchi?) is a peppy cat villager from the Animal Crossing series. She was originally in Animal Forest e+ and did not appear in Wild World. She reappears in City Folk and New Leaf. Her name is a synonym for happy, based upon her Japanese name, which means "happiness", and reflected in her permanent smile. It is also pronounced similarly to (but not the same as) the name "Mary" (except in dialects which have the Mary-marry-merry sound merger). Her name could also possibly be a shortened version of the girl's name Meredith.

Merry is featured on the album cover of K.K. Soul.

Merry is a white cat with short, brown hair that resembles bangs. She has pink blush, inner ears, and her nose appears to be a pink dot. She also wears mascara and initially wears a daisy top. She has a slight double chin and looks similar to Felicity, another cat villager.

Her mouth seems to smile all the time, regardless of her current mood. However, there is a slight difference between her smile and her frown. When she's sad or angry, her mouth is wider and more open compared to when she smiles.

In Animal Forest e+, Merry has the same furniture styling as Carrie's house, with the difference being that the wallpaper is the Mod Wall and the flooring is the Birch Flooring. She also has two Gyroids, the Mini Gargloid and the Tall Harmonoid.

In City Folk, Merry's house consists of a basic, plain, and simple house, with three chairs, The Green-econo chair, the Gold-econo chair, and the Ruby-econo chair, a Green Table with a tea set on it, along with a stove and a retro fridge, and a Tall Bowtoid. Merry does not have a stereo, but if she obtains one she will play DJ K.K. on it.

In New Leaf, Merry acquires some of the green furniture series. She has a tea set on her green table and a cream sofa. DJ K.K. will play on her stereo.

Merry's preferred theme is Cute and she will primarily reward the player with wood.

Merry overflows with an energetic personality that makes others see her as the shining star of the town. And she's happy not to correct them.

At level 6 friendship, she will allow the player to change her outfit.

At level 7, she will reward you with a daisy tee and sparkle stones (x1).

At level 8, she will request the player finds her lost items.

At level 10, she will request that you craft a washing machine.

At level 20, she will reward you with pic of Merry and sparkle stones (x1).

Merry is seen beside the mushroom in Animal Forest e+.

Merry in the City on a rainy day.

Merry in City Folk in the City.

Merry sitting with the player.

Merry and Felicity in a bad mood. 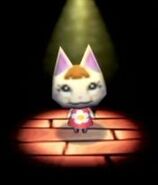 Add a photo to this gallery
Retrieved from "https://animalcrossing.fandom.com/wiki/Merry?oldid=398370"
Community content is available under CC-BY-SA unless otherwise noted.