Animal Crossing Wiki
Register
Don't have an account?
Sign In
Advertisement
in: Articles in need of cleanup, Items, Wild World,
and 3 more

Message in a bottle

A Message in a bottle, as the name implies, is a bottle containing a message. They make their first appearance in Wild World as "Note in a bottle". Messages from the bottle will all say something different.

A "note-in-a-bottle" will sometimes wash up on the beach in Wild World, but can be obtained in City Folk if the player moved from their Wild World town and had one in their catalog.
The player can also buy bottles in Tom Nook's store for 200 Bells each unlimited stock, like regular paper. If they write something inside them and release them, and a friend has done the same, when the two connect through Contact Mode/Tag Mode, they will each find afterwards their friend's note-in-a-bottle washed up on their beach, as well as both having each other's constellations. They can be saved in the Town Hall like Letters. The player can also send presents along with the notes.

Now named Message in a bottle, New Horizons uses the item as a means for the player to randomly obtain DIY recipes. Instead of coming from a fellow villager or from another player, they are notes from other villagers that are not on the same island as the current player.

Each day, a message in a bottle will wash up on the shore of the island, which includes a letter and a DIY recipe inside. If the bottle from the previous day has not been picked up, another bottle will spawn after picking up the first one and reopening the game. If there are more than one players on the island, the other players can also find another bottle of their own when they log in the same day.

For Mystery island tours, bottles can spawn on the beaches on the islands you visit at random.

For the Bunny Day event, specialized striped bottles can be found which include limited recipes dedicated to the event itself.

A bottle on the beach, in Wild World. 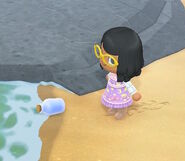 A bottle on the beach in New Horizons. 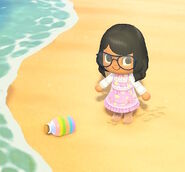 A bottle during the Bunny Day event.