watch 03:19
Wiki Targeted (Games)
Do you like this video?
Play Sound

Wishy, Celeste
A meteor shower is an event that happens in Animal Crossing, Animal Forest e+, Wild World, City Folk, New Leaf, and New Horizons. As the name implies, meteors or shooting stars shower the sky and the player can wish upon a one to receive a gift either the next day or during the event, depending on the game.

In the GameCube games it is on August 12th and lasts from 6pm til 9pm. It is held at the Pond where the player can view the meteors' reflections in the water. The player can receive a telescope from Tortimer during this event. In later games, it is an unscripted event that happens on random nights with clear skies at 7 PM and lasts throughout the night.

Meteor showers are renamed "Shooting stars". If the player came across a shooting star, they could repeatedly press the "A" button while it fell from the sky, making a wish on the star. A few days later they would receive a letter from Wishy the Star with a piece of spotlight furniture attached. Spotlight items are normally available at Tom Nook's shop for a high price.

Meteor showers return in New Leaf, where they will be announced the same day on the Bulletin Board. The player can wish on shooting stars, which are announced by twinkling sounds, during the meteor shower by pressing up on the D-pad to view the sky, then pressing the "A" button when one streaks across the screen. The player must not have anything in their hands to wish on stars. The star will flash to acknowledge the player's wish. The next morning, the player will receive one letter from Wishy the Star with a piece of furniture attached. The number of stars a player wishes on affects only the text of the letter.

Like other versions of the game, the player can't make a wish if they are holding a tool; they must unequip the tool in order to do so.

Meteor showers are also present in New Horizons, and the player can wish upon individual shooting stars to obtain star fragments, large star fragments, and zodiac star fragments, which will wash up on the beach the next morning to be collected and used in special DIY projects given by Celeste.

Shooting stars can only appear after 7pm, during hours where the sky is clear or mostly clear of clouds. A ding sound will cue if there is a shooting star present. The player can wish upon a shooting star by looking up at the sky with the right joystick and pressing A. The wish cannot be made if the player has a tool in-hand. If the wish is made successfully, a louder twinkling sound will play as the star flares. Wishes can still be made if there are buildings or trees blocking the sky.

Up to an additional 20 star fragments may spawn if the player had guests wishing on stars as well, at a rate of 1 extra fragment per 4 wishes, up to 100. When a visitor makes a wish, a star fragment will appear on the beaches of their own island.

A meteor shooting across the sky in New Leaf

A meteor during a meteor shower in New Leaf.

A meteor twinkling after being wished upon in New Leaf

A meteor shower report on the bulletin board in New Leaf.
Add a photo to this gallery

A meteor during a meteor shower in New Horizons.

A meteor, taken with the in-game camera in New Horizons.

Player making a wish on a meteor in New Horizons.

Starting a wish on a star.

3 star fragments on the beach.

More star fragments on the beach.
Add a photo to this gallery 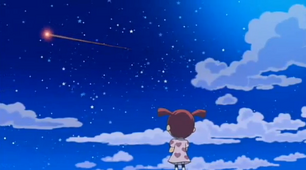 Retrieved from "https://animalcrossing.fandom.com/wiki/Meteor_shower?oldid=564454"
Community content is available under CC-BY-SA unless otherwise noted.