watch 02:45
Wiki Targeted (Games)
Do you like this video?
Play Sound

Mom
Mother's Day, like in real life, is an event for mothers. It is a holiday that appears in all of the Animal Crossing series games. Typically, the player will receive a letter with a present from their mother on this day.

The player will receive a Lovely Phone from the player's mother.

The player receives a letter from the player's mother with a Pink Carnation. She will request to player to reply back, which is impossible in the game.

The player will receive pink carnations in a letter, similar to receiving a red carnation on Father's Day.

In New Horizons, for the entire month of May, Nook Shopping offers a unique seasonal item to celebrate Mother's Day: the Thank-you Mom mug, which costs 600 Bells. The catalog description of the mug reads:

“Event: Mother's Day
Mother's Day is a day for saying "thank you" to that warm, loving person who always watches over you. What should go into a gift mug? How about all your love, for starters?
” 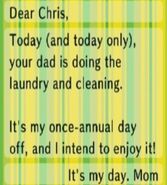 Retrieved from "https://animalcrossing.fandom.com/wiki/Mother%27s_Day?oldid=543248"
Community content is available under CC-BY-SA unless otherwise noted.