The Mushroom Series (alternatively Mush Series) of furniture is a special series of furniture, only available during certain events. Items in the series are only freely obtainable during October and November.

Leonardo is currently the only villager who owns a piece of this furniture in his house, this being the table.

In Wild World, items can be obtained from Cornimer during the Acorn Festival in exchange for acorns.

In City Folk, items can be obtained in the month of November by looking for mushrooms on the ground. Each day, there will be six mushrooms placed randomly around the town. Most mushrooms can be found next to a tree, while rarer mushrooms must be dug out of the ground using a shovel. At least one of the mushrooms will be an item of furniture from the series. The other mushrooms may be sold to Tom Nook or eaten by the player or Wendell.

In New Leaf, items are gained in a similar way as they were in Animal Crossing: City Folk. In November, mushrooms are found at the bases of trees, but not in dig spots. Additionally, mushrooms can be found growing around tree stumps with special patterns regardless of the season. New items added to the Mushroom series include the Mush Wall lamp and the Mush Hanger.

The Mushroom series in a house 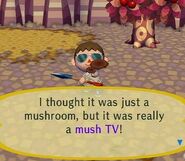 Mush Bed
Add a photo to this gallery

Retrieved from "https://animalcrossing.fandom.com/wiki/Mushroom_series?oldid=493711"
Community content is available under CC-BY-SA unless otherwise noted.