Animal Crossing Wiki
Register
Don't have an account?
Sign In
Advertisement
in: Consoles, Video game consoles, Unrelated to the main series,
and 2 more

Nintendo Switch
The Nintendo 3DS is the successor to the Nintendo DS family. It has 3D technology without the need for glasses. The screens use a parallax barrier system. New with the 3DS is the analog control stick, gyro sensor and motion control. It is the home of the two Animal Crossing titles: New Leaf and Happy Home Designer. Animal Crossing Clock and Animal Crossing Calculator are also available as DSiWare titles.

The 3DS has a gyroscope (tilt sensor) allowing it to detect movement of the console. This gyroscope is used for some 3DS games, most prominently the built-in one known as Face Raiders. It has an analog stick called the Circle Pad. It has, like the DSi, two cameras: a regular camera atop the 3D screen, and two on the lid of the 3DS allowing for 3D pictures. The 3DS has two screens: the lower screen, which remains a regular touch screen, but the top screen has been shortened and widened, and it serves as the 3D screen for the console. There is a slider on the right side of the console allowing one to adjust the 3D depth so it can be focused. The 3D can also be turned off. The 3DS has a far more powerful processor and can display vastly more detailed graphics compared to the original DS line of consoles. The 3DS is also able to play 3D movies, on the top screen. It is backwards compatible with the Nintendo DS and DSi. It has a Virtual Console with Game Boy, Game Boy Color, and Game Boy Advance (Ambassador only) games. Carrying the 3DS whilst traveling allows it to swap data with other nearby 3DS systems over local wireless. This feature is called StreetPass.

None
The Nintendo 3DS XL (LL in Japan) (iQue 3DS XL in China) has 90% larger screens than the original Nintendo 3DS and additionally features longer battery life. It also comes with a 4GB SD card as opposed to the previously included 2GB card. Additionally, the Start, Select, and Home buttons are completely redesigned to fit the longer screen. The bigger screen minimizes the reflection in light, and has more advanced graphics including the 3D. The shape of the 3DS XL is smoother as opposed to the rigid shape of the original model. The placing of the stylus is on the right side of the 3DS XL and is no longer on the top left side, making it easier to access.

"New" Nintendo 3DS
The Nintendo 2DS is a budget model of the Nintendo 3DS. This console runs the same software as the 3DS and 3DS XL, but it does not have a hinge nor can it run 3D graphics. However, it is a lot cheaper, and is aimed at a young audience who might break a 3DS hinge and whose eyes are not developed enough to use the 3D effect safely. The console was released in October 2013 worldwide to coincide with the launch of Pokémon X and Y.

None
On August 29th 2014, Nintendo announced improved models of the 3DS named New Nintendo 3DS and New Nintendo 3DS LL in Japan. This model includes greater CPU processing, the addition of ZL & ZR triggers and dual analog (the Circle Pad above the D-Pad and the C-stick above the A-B-X-Y buttons), the relocation of the START & SELECT buttons to the right of the Touch Screen (where they replicate the START & SELECT buttons on the original Nintendo DS), a built in amiibo reader, and recolored A-B-X-Y buttons, the latter reflecting the interface of the Super Famicom and PAL SNES controllers. This model will have five exclusive games, it was released on Japan on October 11th, 2014 and Australia on November 21st, 2014. It released in North America and Europe on February 13th. Only the New Nintendo 3DS XL was released in North America at launch. On August 31st, 2015, Nintendo of America announced that the regular-sized New Nintendo 3DS would be released in North America as part of a special Happy Home Designer bundle that released on September 25th, 2015.

The New 3DS has a quad core CPU, although the clock speed remains unchanged, RAM has been doubled to 256 MB and VRAM has increased from 6 MB to 10 MB.

The New Nintendo 2DS XL (branded as New Nintendo 2DS LL in Japan) is a handheld game console produced by Nintendo. It is the sixth and final system in the Nintendo 3DS family of handheld consoles, and was released in Australia and New Zealand on 15 June 2017, in Japan and South Korea on 13 July 2017, and in North

The themes can be changed at any time on the Nintendo 3DS. The player starts out with Five themes come in four colors. To get more themes, the player must go to the Theme Shop that can be accessed via the 3DS theme list and buy themes that are usually small in prices. Below is a complete list of the Animal Crossing themes the player can get. 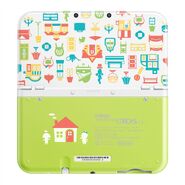 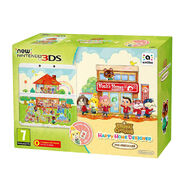 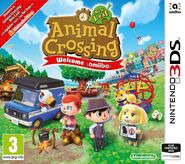 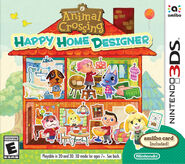