Animal Crossing Wiki
Register
Don't have an account?
Sign In
Advertisement
in: Consoles, Video game consoles, Unrelated to the main series,
and 2 more

The Nintendo GameCube was released on September 14, 2001 in Japan, November 18, 2001 in North America, May 3, 2002 in Europe, and May 17, 2002 in Australia. The GameCube sold 21.74 million units worldwide. A Japan only hybrid version of a GameCube and a CD/DVD player called the Panasonic Q also known as the GameQ, was launched on December 13, 2001 and was discontinued on December 18, 2003. Nintendo discontinued the Nintendo GameCube on February 22, 2007; at the end of its lifespan, after the release of the Wii. Its games were discontinued in 2008

The GameCube's games are also backwards-compatible with its successor, the Wii. 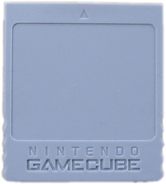