Nook's Cranny returns in Animal Crossing: New Horizons, but with some significant differences: it is operated by Timmy and Tommy, its inventory is larger, upgraded versions of the store are also named "Nook's Cranny", and a convenient shipping box outside the store is available at all times to sell items for a reduced value.

Nook's Cranny has a generally similar layout with minor variations in Animal Forest, Animal Crossing, Wild World, City Folk and New Horizons. In Wild World and City Folk, at the back of the store 2 pieces of furniture stand alone. To the left of them is a long table that spans the whole wall except for space for Nook's Point-Tracking System. In the middle there is a table for three tools. To the bottom right of the table, there are some vases.

The store itself resembles a shed, made with wooden planks and held together with metal sheets. In fact, it is even stated that Tom Nook's shop may be Tortimer's old gardening shed before he became mayor.

In City Folk, Nook's Cranny supplies a wallpaper, a flooring, a flower seed, medicine, two pieces of furniture, three tools (two in Wild World, and one in Animal Crossing) and some writing paper. During the month of October, one of the tools will be replaced with a piece of candy (except in Wild World). The player must spend and/or sell a total of 25,000 Bells and play for at least eight days for an upgrade.

This store is also available as a model after spending at least 30,000 Bells in Wild World and City Folk.

In New Horizons, the deserted island initially has no store building. Players can still buy and sell goods with Timmy in the Resident Services tent in the meantime, but constructing a store requires reaching several milestones:

The next day, upon entering Resident Services, Timmy and Tom Nook will be seen discussing opening a store on the island. Speak to Timmy to learn more and be asked to supply crafting materials for the store's construction:

These materials do not need to be submitted all at once, but Timmy will insist that each material be given to him in full. He will turn down any quantities lower than 30. After submitting all materials, Timmy will hand over a 7x4-tile plot marker for the player to choose the store's location. The completed Nook's Cranny will open at 8 AM on the day after the plot marker is placed. Timmy and Tommy mention that they decided to name the store after a shop that Tom Nook ran long ago.

In New Horizons, Nook's Cranny is open daily from 8 AM to 10 PM and offers four pieces of furniture (two that are limited and two that are unlimited), a full set of flimsy tools plus the slingshot, three types of flower seeds, two types of saplings, the island's native fruit, medicine, one umbrella, one Wet Suit, one wrapping paper, Party Poppers, Customization Kits, DIY Recipes for flimsy tools and some furniture, four wallpapers, and four floorings. Everything aside from the two limited furniture items has an unlimited stock and can be purchased multiple times.

Timmy and Tommy also run a daily "hot item" promotion. Each day, they select a specific item that can be produced with a DIY recipe that they will buy from the player for double its normal value. The player can sell as many hot items as they want.

A shipping box is located just outside the store, to the left of the doorway. It is available 24/7, regardless of whether the store is open or closed. The player can place any items in it with the exception of turnips that they wish to sell, but only 80% of the sell price will be given through this method, a trade-off for the box's convenience. The player is also not paid immediately. Instead, the box will calculate the sell price as items are submitted and record a cumulative value for all items sold for the current day. The next day, the player will receive a phone call from Timmy/Tommy thanking them for their sales and informing them that their money has been deposited into their NookDirect Bank account.

Constructing Nook's Cranny is required in order to unlock Daisy Mae and the stalk market. Daisy Mae will visit the island every Sunday morning to sell turnips to the player, which can be sold at Nook's Cranny on any other day of week. Purchased turnips always expire the following Sunday. The player can ask Timmy and Tommy about the current turnip prices, which change every day at 12pm and 12am.

Nook's Cranny's music will change 10 minutes before the store closes, and once the clock hits 10pm, Timmy or Tommy will kick the player out of the store; however, they will only do so if the player is not in any kind of dialogue.

The specific requirements in order to upgrade Nook's Cranny are as follows:

Once the requirements have been met, Isabelle will mention during daily announcements that business at Nook's Cranny has been booming and as a result, it will be expanded. The store will close down for renovation the next day, and re-open the day after. The shipping box is unavailable on the day renovations take place.

In terms of new features, the exterior and interior of the shop now have decorations that change with the seasons. In addition, seasonal items with an unlimited supply will occasionally be offered in the lower left corner of the store on a special blue platform. The only exception to this rule is the Spooky furniture set during October- on each day only one Spooky item will be stocked daily. If two seasonal sets are active at the same time, both item pools will combine, with the exception of the Festivale items. 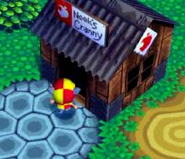 Animal Forest (Note that the pots, clock, and wares on the tables are billboard sprites rather than 3D models)