Normal villagers (普通 Futsū, or 私 Watashi) (sometimes called Sweet or Sweetie villagers) are female characters in the Animal Crossing series. The name comes from their neutral opinion on things such as hobbies and other characters such as the player, villagers, and special visitors. They are often kind to the player. As of New Horizons, there are 77 normal villagers, making them the most common female personality. Unlike most personalities, there were formerly no personality changes involving the normal personality throughout the series until Faith returned in New Horizons with a sisterly personality.

Normal villagers, despite being called "normal", have a lack of self-worth, where they feel self-depreciative. They also appear slightly obsessive with cleanliness and hygiene - a trait also found in peppy villagers. They don't, however, appear to show any concern for their physical appearance, making them happy with what they have. In Wild World and New Leaf, they sometimes talk about a friend called Moppina, an unseen mop which reflects their slightly withdrawn nature and fixation on cleanliness. They can also have a conversation with a peppy villager about Moppina, which the peppy villager may find funny. They get along very well with every villager and will usually talk about other villagers, instead of talking about themselves and their problems. However, they will occasionally talk about themselves and their personal issues. If a normal villager stays in the player's town for a long period of time, she will get rid of all her furniture and when she does leave, she will announce to leave "empty-handed, and without anything."

Normal villagers have the easiest time getting along with smug, lazy, jock, and other normal villagers, and sometimes even snooty and cranky villagers. The male equivalent of normal villagers are lazy villagers, who display many similar characteristics to them, including their caring and friendly nature that both personalities share.

In Animal Crossing and Animal Forest e+, the islanders Caroline, Faith, June, Marina, Norma, and Patricia act down-to-earth in their speech, stating various "blessings" of the island and its surrounding landscape. They are also much more airheaded and childish, dreaming of living in fairy tales or remarking at how "magical" a piece of furniture is.

Below are some (not all) quotes made by normal villagers.

The following is a list of villagers who have the normal personality in their latest installments of the Animal Crossing series games. 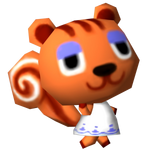