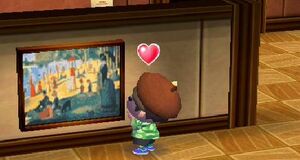 AF, AF+, AC, AFe+, WW, CF, NL, NH
Paintings have an appearance in the Animal Crossing series. They play a small part in the game, with players having the option of donating them to the museum or placing them as furniture.

Paintings in the series are copies of renowned paintings in the real world, such as Da Vinci's Mona Lisa or Klimt's The Kiss. They do not share the same name.

Paintings are decorative items that, like sculptures, may be donated to the museum by talking to the curator, Blathers, who will authenticate them before accepting them. All paintings will be accepted unless they are already on display, or are forged. Accepted paintings are added to the gallery in the museum with a corresponding title and name of the Player who donated it.

Forged paintings are not displayed, in keeping with the museum's wish for high-quality exhibits, and are handed back to the player. Paintings may also be placed in player's house, upon which they are placed on an easel or on the wall, as of New Leaf.

Forged Paintings can be sold for 10 bells. In Wild World, players may exchange a forged painting for 100 Bells upon signing up for a certain kind of insurance. In New Leaf, forged paintings cannot be sold and will instead have to be disposed of at Re-Tail at the cost of 100 Bells or thrown away in a garbage can.

Paintings can be obtained from a variety of different ways throughout the series. In all of the games, the best possible way to obtain them is through Crazy Redd's or through Tom Nook's store or the Nookling stores.

There are 15 paintings in total.

In Wild World, there are 20 paintings in total. In the game, insurance was introduced and available by talking to Lyle. When the player is sold a forgery (and authenticated by Blathers), the player can talk to Lyle the following week and exchange it for 100 bells instead of 10 bells at Tom Nook's store.

There are 22 paintings available in City Folk. Insurance was omitted from the game.

In New Leaf, 25 paintings can be obtained. In the game, the ability to identify fakes before sale was added, with forged paintings showing distinct differences from their authentic versions.

Villagers give out paintings as presents, particularly smug villagers. However, there is no way to authenticate it until after the sale.