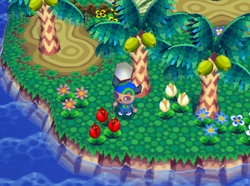 Unknown
Palm trees are a special type of tree in the Animal Crossing series. Unlike Fruit Trees, these can only grow in coastal beach acres (or directly on the beach in New Leaf), and bear only two fruits instead of three. In most games palm trees only bear Coconut, however a second type that bears Bananas were introduced in New Leaf.

Palm trees were originally much taller in the GCN games, their size decreasing as games progressed. Several bug and beetle species, from the coconut crab to the goliath beetle, require palm trees in order to appear.

Coconuts and bananas cannot be obtained from villagers, unlike other Fruit.

Palm trees are notoriously picky about where they will successfully grow. They must be planted near the beach, but not too close to the water. Planted anywhere else, palm saplings will wilt.

Palm saplings grow in five stages, gaining a branch each day until they are fully grown, when they will bear two fruits.

Coconut palms are the generic palm tree, bearing two coconuts on their branches.

In the Animal Crossing, coconuts can be obtained through the island. They may also be obtained through Tortimer Island in New Leaf if it is the native fruit. However, in Wild World and City Folk they can be found washed up on the beach instead of a regular Shell.

A second palm tree variety that bears bananas were introduced in New Leaf alongside 5 other new fruits. It is identical to the coconut palm, and like this tree will occur on Tortimer Island although never co-occurring. 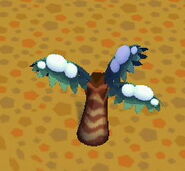 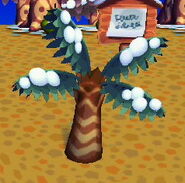 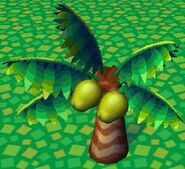 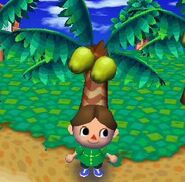