“If you try something new, it's not new anymore, maaan.”
― Pascal, City Folk

Pascal (ラコスケ, Rakosuke?) is a special character that debuts in Wild World and later in City Folk, New Leaf, and New Horizons. He is a red sea otter, with a yellow muzzle, a black nose, and wide black eyes; he wears a beige sailor's watch cap and dungaree overalls, and has a scallop hanging around his neck.

Pascal is a philosophical nomad who spends his days traveling the seven seas (or as he would put it, the one connected sea), talking to strangers, and eating scallops. His laid back, almost hippie-like attitude is manifested in his constant use of the phrase "maaan," and his generally relaxed approach to socializing. While his lifestyle may make him a little odd, it also makes him extremely wise and generous, given his eagerness to spread his knowledge and give away rare gifts.

“The more you learn, maaan, the less you know.”
― Pascal, Wild World

In Wild World, he appears during random weekdays by the river mouth from 6 AM to 12 AM, where the player can listen to one of his deep thoughts. If a player decides to do so, Pascal will give them a piece of ship-themed furniture before performing a perfect dive into the sea and swimming off into the Wild World. Pascal is also involved in the Golden axe trading event. In exchange for a scallop, which is obtained from Tortimer for a massage chair, Pascal will give the player a Golden Axe or a picture of himself and Kaitlin.

Sometimes cranky villagers will, perhaps dubiously, claim that when Pascal was little he got hit in the head with a soccer ball, and from then on he started philosophizing.

“The ocean has no sides maaan, think about it.”
― Pascal, City Folk

In City Folk, Pascal stands on one of the town's bridges on random weekdays from 6 AM to 12 AM. Though Booker will not tell the player when he is in your town, the villagers will usually know. If the player speaks to any villagers near by, they may mention the presence of Pascal. If the player speaks to Pascal himself, he say something very odd. Sometimes, one or two of the words will be green, indicating that it's not just meaningless and may have some relevance in the game. After sharing some "philosophy," if the player has a scallop in their inventory, he will ask for it. If the player gives the shell to him, he will, in turn, give the player a piece of Pirate themed furniture and disappear down the river and eventually to the ocean. If the player does not have a scallop, he will perform a backflip into the river, floating down towards the sea, scaring off any fish along the way. It is unknown exactly where he goes once he floats off screen.

In New Leaf, Pascal might appear upon finding a scallop in the player's town. He will surface behind the player and request that they give it to him. If they do he will give them a furniture from the Pirate Theme and a piece of philosophy. This can only be done once a day. However, if their pockets are full, Pascal will not appear. Sometimes, after the scallop is given to him, Pascal can be seen swimming slowly just outside the southern border of the ocean. If the player swims beside him just after giving him the scallop, they will be able to watch him crack the scallop open and eat it.

The exact odds of Pascal appearing after catching are unknown, but Pascal will not appear during holidays (Although he has turned up on Bunny Day and Harvest Festival) or if the player has their town gate open. Pascal also will not appear if the scallop is caught on the island.

Pascal was originally absent in New Horizons, but he returned as part of the Summer update on July 3rd. He can be spotted when diving in the ocean for Deep-sea creatures, where he may offer the player to trade the creatures for DIY recipes, which are used to craft furniture items from the Mermaid Series. He can also give the player mermaid themed dresses and matching accessories or pearls required to craft the Mermaid Series furniture. In the trailer officially released by Nintendo, Pascal will only grant the player with DIY recipes in exchange for scallops but no other Deep-sea creatures.

Similarly to his appearance in New Leaf, Pascal will only appear once per day to trade a scallop for a DIY or themed outfit regardless of how many scallops the player collects or has in their inventory. Also, Pascal may occasionally gift the player Pearls, which are a required material to craft furniture for the Mermaid series. His appearance is random and he will not always appear once the first scallop is collected for that day. His appearance is also not affected by other NPC’s that visit the player's island.

Like in the previous entry, the player can swim alongside him as he exits and watch him eat the scallop that they traded outside of the border. If the player swims close enough, he will look over at them but does not react to Reactions done near him.

In the Animal Crossing movie, Pascal gives Tortimer some of his philosophy. He is voiced by Takashi Miike.

The player talking to Pascal.

Pascal standing on land next to the beaches.
Add a photo to this gallery

Pascal as he appeared in City Folk.

Pascal will fall down waterfalls in City Folk.

Pascal diving into the river

Pascal swimming outside the ocean border in New Leaf.

A player talking with Pascal.

Pascal's RV
Add a photo to this gallery

Pascal's PC Icon
Add a photo to this gallery 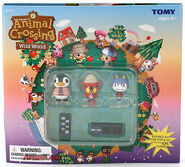 Pascal in a Wild World toy set with Rover and Aurora.

A plush of Pascal.

Pascal's Japanese Amiibo card
Add a photo to this gallery

Retrieved from "https://animalcrossing.fandom.com/wiki/Pascal?oldid=461416"
Community content is available under CC-BY-SA unless otherwise noted.