Peck (ふみたろう, Fumitarō?) is a bird villager with a jock personality. His name is a reference to the pecking of a bird and also the colloquial name for the pectoral muscles, as homage to his personality. He was introduced in New Leaf. He appears on the album cover for Spring Blossoms.

Peck has a jock personality and has a great interest in sports and bodybuilding. Jock villagers are hyperactive and motivated but often come across as egotistical and dense. As a jock villager, Peck is very interested in his hobby, and may compete against the player at catching bugs and fish. Jock villagers get along with peppy, cranky and uchi villagers, but conflict with the laid-back lifestyle of lazy villagers. Snooty villagers may also be difficult to get along with for Peck.

Peck's room contains mostly classic and alpine furniture. He has a classic clock, a classic bed, a minimalist sofa, a foosball table, two potted plants, a Mini Sproid, a stereo, and an air conditioner. His wallpaper is the Citrus Wall, and his flooring is the Alpine Carpet.

Peck's room features a special furniture piece, Diver Dan. Normally, this can only be purchased in medals on the island, however, if Peck invites the player to his house, they may be able to buy it from him.

Peck stuck in a pitfall 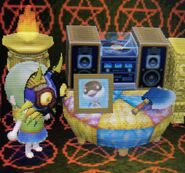 Peck's picture as it appears in the player's house

The Player obtaining Peck's pic
Add a photo to this gallery

Retrieved from "https://animalcrossing.fandom.com/wiki/Peck?oldid=399774"
Community content is available under CC-BY-SA unless otherwise noted.