Start a Wiki
Peppy villagers (also called 元気 genki, or アタイ atai) (sometimes called perky) are female characters in the Animal Crossing series. They are incessantly friendly and excitable, making them very quick to apologize for anything they regret doing, even if they had not done anything particularly wrong. As of now, there are 65 peppy villagers. The Japanese name Genki comes from Wild World, where it is referenced in the game's files. It hasn't been mentioned outside of the game by Nintendo.

Peppy villagers speak with chipper, bouncy voices and enjoy cheering when talking with player(s) and other villagers; they are rarely discouraged from doing anything. They come out of their homes often. In the original Animal Crossing, they go to sleep at 11:30 PM and wake up at 7:00. In Wild World and City Folk they usually go to sleep at 2:30 AM and wake up at 7:00 AM. In New Leaf, they wake up at 9:00 A.M. and go to sleep at 1:00 AM. In New Horizons, they wake up at 7AM and sleep at 1:30AM. They are always excited to see the player. They have short attention spans and wild imaginations. They express a number of aspirations which they will often share with the player such as their numerous claims to stardom as a pop star or diva. They have a tendency to say stereotypical valley girl words and phrases like "ohmigosh!!!" and "like" (as in, "That is, like, so cool!"). When they are describing certain things, they often use "SOOOO!" and "totally!" They commonly say a long, drawn-out "Yaaaay!" to show excitement and tend to claim they are hyper because they eat candy frequently. In New Horizons, Peppy villagers may sprinkle their speech with French words.

Peppy villagers are considered the female equivalents of Jock villagers; they use stereotypical slang words/phrases, are energetic, and somewhat immature.

They find it easy to get along with other villagers, but may become the center of jokes and gossip created by snooty and cranky villagers, and when either of two are rude, peppy villagers are rude back to them. They get along with normal, lazy, and jock villagers, who naturally avoid making rude comments and share similar lifestyles with them, such as; food with lazy villagers, activities with jock villagers and typical, 'girly' discussions with normal villagers. They don't hesitate to talk to snooty and cranky villagers, but may annoy them and make them angry with their conflicting habits, such as jumpiness, which conflicts with their refined stature.

Below are some (not all) quotes made by peppy villagers. 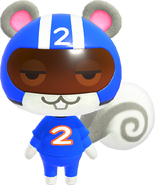 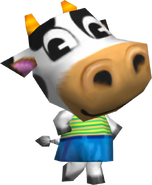 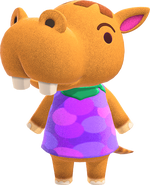 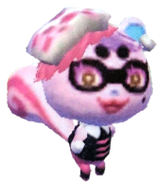 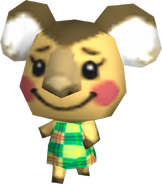 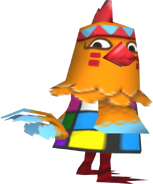 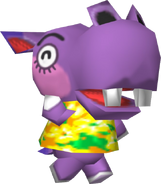 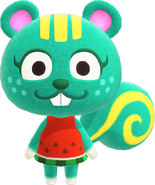 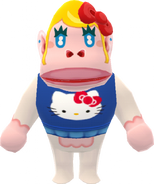 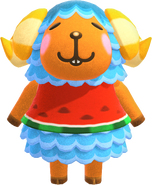 Winnie
Add a photo to this gallery

Retrieved from "https://animalcrossing.fandom.com/wiki/Peppy?oldid=482323"
Community content is available under CC-BY-SA unless otherwise noted.