Blend,
The regular amount of milk,
Two spoonfuls of sugar

“What? I'm a mail carrier! Don't ask me if I carry babies. We ask the storks to do that.”
― Pete, City Folk

Pete (ぺりお, Pelio?) is a pelican who delivers mail in the Animal Crossing series.

In every game, once the player wins his trust, he will explain his romances with Pelly and Phyllis, the clerks at the Town Hall (WW, CF) and Post Office (AC, NL). He appears in the town at 9:00 AM and 5:00 PM to deliver the mail.

Pete looks similar to Pelly, with white feathers. He wears a green jacket with a navy blue mail pouch and a green hat with a red badge in the middle and white and orange stripes.

“Ah, yes. I've heard there are rumors about me and Pelly. And I really don't appreciate any of it. Pelly is nice, and she makes me very nice lunches... But... how do I put this... she's too much of a child. I'm interested in a more mature relationship.”
― Pete talking about his relationship with Pelly, Animal Crossing

In Animal Crossing, he takes the mail after the player has given Pelly or Phyllis five letters at the Post Office. He flies down towards the player's house at 5 PM to deliver mail and lands by the bulletin board. He will walk to each mailbox and place mail inside of each one, unless disturbed by the player, whom he will talk to. Once the mail has been delivered, he will take off and fly away within two acres.

“Hey, you always look like you have all the time in the world. Oh, me? That's so rude! It's not like I'm sitting at a desk eating bonbons all day! I may not look like it, but I'm a professional mail carrier, you know! I have to determine the best delivery route to take every day! I was just visualizing today's route in my head!”
― Pete, talking about himself after being shot down, Wild World

Pete continues to be the mail carrier in Wild World, but with a slightly different role. In the game, he cannot be seen delivering the mail, but can be seen flying above the town where he can be shot down with a slingshot between 9 AM and 5 PM, and he would not be aware who shot him down. He can be found near the player, laying face down. He will proceed to get up once talked to. Once he is shot, the player will not be able to move until he falls on the ground.

“Oh? Hey there! It's not every day that someone flags me down to say hi! Usually it's "HEY! Where's my package?!" Oh, me? I'm the mail carrier, Pete.”
― Pete introducing himself to the player, City Folk

In City Folk, Pete appears walking around town at 5 PM to deliver the mail, at the same time as he did in Animal Crossing. He also appears when Nintendo sends mail to a player. However, he randomly appears in the town, rather than flies in. He will only talk once to the player when spoken to. Afterward, he only says that he has to get to work.

It is clear that Pete does not have feelings for Pelly in City Folk, but seems to be interested in her sister, Phyllis. When talking to him, he blushes while mentioning that Phyllis' perfume smells "exotic", and giggles when he mentions that she said "goodnight" to him.

When he is in town, some villagers will start rumors about him and other villagers, some even suggesting they are in a relationship with him. If you listen to some of their conversations, snooty and cranky villagers will say how they have changed the name plates on other snooty and cranky villagers' homes to "Phyllis' House," usually involving this with other arguments, like giving other villagers' fleas for revenge. Booker will not know when Pete is in town because Pete flies into town, rather than going through the Town Gate.

Pete makes a reappearance in Animal Crossing: New Leaf, and the only physical change to him is that he is taller. He appears from Monday through to Friday, and can be seen wandering around your town from 9:00 to 9:30 AM and 5:00 to 5:30 PM.

He also appears when special DLC is delivered and meets you when you exit your house.

Pete in New Leaf, referencing his Wild World past.

Pete delivering mail.
Add a photo to this gallery

Pete plays a minor role in Dōbutsu no Mori. He makes an appearance when Margie sends Ai a letter about her fulfilling her dreams. He also makes a more muted, background appearance during the Fireworks show, eating pink cotton candy.

Pete makes a cameo in Isabelle's reveal trailer; giving her the letter inviting her as the 68th Smash Fighter.

A common factor in all Animal Crossing games is that Pete openly expresses his feelings for Phyllis. Pete will tell the player that Phyllis' perfume is "exotic", and blushes when he says that she said good night to him. Once the player earns his trust, Pete will constantly talk about Phyllis and Pelly on a regular basis.

Phyllis, in comparison, is shown to dislike Pete. In the Roost, she often comments about the "fool" that often follows her here, a clear reference to Pete.

In Animal Crossing, he is aware of rumors regarding him and Pelly, though he is not fond of them and dismisses them, suggesting Pelly is "too young". His love for Phyllis is often talked about among the villagers.

Similar to Animal Crossing, Pete says "I'm interested in a mature lady who can take care of herself".

In City Folk, snooty and cranky villagers discuss putting "Phyllis" as the nameplate on someone's house for the victim to be inundated with "creepy love letters". Pete discusses other rumors spread by other villagers saying that Phyllis is frosty and aloof, and has a "personality like sandpaper".

In New Leaf, Pete talks about similar things as from City Folk. In the Cafe, he is curious when Phyllis comes and mentions that he would like to hang out with her. 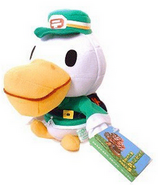 Pete plush
Add a photo to this gallery

Retrieved from "https://animalcrossing.fandom.com/wiki/Pete?oldid=396480"
Community content is available under CC-BY-SA unless otherwise noted.