View source
watch 02:53
GTA: The Criminal Enterprises - The Loop
Do you like this video?
Play Sound

CF, NL
“Now, the great thing about pinwheels is that the faster you run, the faster they spin! Give it a try!”
― Phineas, City Folk


Phineas (パロンチーノ Paronchīno?, Palloncino) is a sea lion who was first introduced in City Folk. He can be found in the city at between 9 A.M. and 7 P.M. in reasonable weather conditions (sunny or overcast/cloudy). He gives the player special hand-held items that the player cannot get anywhere else except wi-fi gameplay, for no purpose other than for joy and for free. He has been known to appear in a player's city for days in a row, or not at all for weeks.

In New Leaf, Phineas is now a scout master, and will appear in the player's town if they have fulfilled the criteria for one or more badges, which he will hand out when asked. Sometimes the player can talk to him again later and he will give another badge depending on the player's achievements. If the player has a pending medal to be received, he will always be present in the player's home town between around 9 A.M. to around 10 P.M, provided reasonable weather conditions as aforementioned.

As it says in the City Folk game guide, this is Phineas' description:

Hitch a ride to the city on sunny days for a chance to meet Phineas out in the plaza. This happy-go-lucky character lives to spread cheer and will give you a balloon, pinwheel, or bubble wand for just talking to him. Limit one goodie per visit!

Phineas is a brown sea lion who wears small, black eyeglasses, a tan hat with a brown feather and a tan scout uniform with a brown belt, yellow ribbon and badges, showing that he is a Scout Master. He has white, bushy eyebrows and three whiskers on each side of his olive colored muzzle. The insides of his ears are orange and he has a black nose. 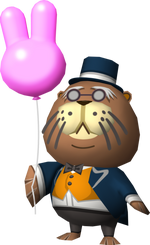 He gives out a variety of film gifts:

The player can only receive one gift per day. The balloons, bunny balloons, and pinwheels come in a variety of colors, such as orange, blue, green, red, pink, yellow, and purple. Balloons will fly away if the player trips and falls or if player gets stung by a bee.

In New Leaf, Phineas wanders the town on days with clear weather when he has badges to give the player for meeting certain goals. When he is spoken to, he may tell the player a little bit about their milestone(s) in the game and award the appropriate badge. Multiple badges can be received from Phineas on a single visit, and there are 24 badge types in total.

There are three ranks for each achievement. The first rank is bronze, the second is silver, and the final rank is a golden, colored version of the badge.