Poncho (ポンチョ, Poncho?) is a jock cub villager that has appeared in every game in the Animal Crossing series. His name refers to a poncho, an article of clothing. His catchphrase is li'l bear,' which has to do with the fact that he is a bear cub himself.

Poncho is a navy blue bear cub. He initially wears the Blue Grid Shirt, an off-white shirt with blue lines on it. On Poncho's head, there is a tuft of hair that is a lighter blue than his body, and he has yellow paws and feet. The inside of Poncho's ears are a dark brown or maroon color, and his arms and legs are navy blue like the rest of his body. He looks similar to Aisle, another cub villager.

Poncho has a jock personality and has a great interest in sports and bodybuilding. Jock villagers are hyperactive and motivated but often come across as egotistical and dense. As a jock villager, Poncho is very interested in his hobby, and may compete against the player at catching bugs and fish. Jock villagers get along with peppy, cranky and uchi villagers, but conflict with the laid-back lifestyle of lazy villagers. Snooty villagers may also be difficult to get along with for Poncho.

In Animal Crossing, Poncho's house seems to have no specific theme and is rather random, there are four Gyroids lined up, the two Tall Droploids, the Mega Timpanoid, and the Mini Bowtoid along with the lamentoid. There is mostly Modern furniture in his house, such as the Modern Bed, the Modern Dresser, and the Modern Wardrobe. There is also other various items, such as the Classic Table, a Cream Sofa, an Aloe, a stove and fridge, and a Comfy Sweater. The wallpaper is the Tartan Wall and the Steel Flooring. There is no stereo, therefore no music.

In Wild World and City Folk, Poncho still has no specific theme, still with many furniture from the Modern Series, like the Modern Bed and the Modern Cabinet. He has three gyroids, Mega Timpanoid, the Lamentoid, and the Tall Droploid. If Poncho is given a stereo it will play K.K. Condor.

Poncho's house as it appears in Animal Crossing.

Poncho's house in New Leaf.
Add a photo to this gallery 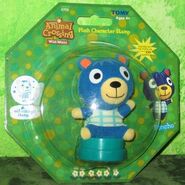 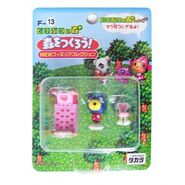 Poncho is featured in this play set, along with the Lovely Bed and Chair. 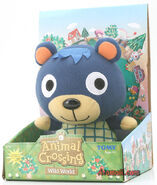 Poncho plush
Add a photo to this gallery
Retrieved from "https://animalcrossing.fandom.com/wiki/Poncho?oldid=398557"
Community content is available under CC-BY-SA unless otherwise noted.