“I've heard that Mr. Resetti has no fur underneath his helmet. That poor, poor mole... eek!”
― Porter, Animal Crossing

Porter (えきいんさん, Ekiinsan?) is a monkey who runs the Train Station in the Animal Crossing series, by coordinating transportation between towns. His occupation is where his name comes from. He first appears in Animal Forest and Animal Crossing, and re-appears in New Leaf. Little is known about him. He resembles the villager, Champ, who is in Wild World and City Folk.

Porter is a brown monkey with a pale yellow face, hands, and feet. He wears a blue station porter uniform, which consists of a jacket with gold buttons and two pockets on it. He also wears a hat with a badge in the front center.

Porter as seen in the introduction to your new village in Animal Forest.

Porter on the station platform in Animal Crossing.
Add a photo to this gallery

Porter, as he appears in Animal Crossing: New Leaf.

Porter during the remodeling celebration of the train station.
Add a photo to this gallery 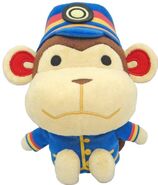 Porter plush
Add a photo to this gallery

Retrieved from "https://animalcrossing.fandom.com/wiki/Porter?oldid=418428"
Community content is available under CC-BY-SA unless otherwise noted.