View source
watch 02:53
GTA: The Criminal Enterprises - The Loop
Do you like this video?
Play Sound

This article is about the building. For the post office in the Town Hall, see Town Hall.

Post Office Tunes
The Post Office is a building in Animal Forest, Animal Crossing, and New Leaf where players can mail letters to other players, themselves, or to villagers in the town. It appears in a random location on the map in the earlier games in one of the northern most corners of the map near the Train Station. It was moved to Main Street in New Leaf.

The Post Office was merged into Town Hall in Wild World and City Folk and replaced by the mail services offered by Dodo Airlines at the Airport in New Horizons, marking its first complete absence from the series.

The special characters Phyllis and Pelly, two Pelican sisters, work inside the building as clerks. Pelly serves as the daytime clerk and Phyllis works the nightshift. Pete also works for the Post Office, and can be found around the town delivering the mail.

In Animal Crossing, the Post Office is located in one of the A acres, but cannot be located in acre A3 given that is the location of the Train Station. Players use this building to send letters to villagers and can also store mail. Outgoing letters are displayed on the counter behind the clerk once they have been posted.

Pelly and Phyllis serve as the day and night clerks, respectively, while Pete can be found wandering the town delivering mail.

In New Leaf, the Post Office returns as an independent building on Main Street rather than as part of the Town Hall as it appeared in Wild World and City Folk. It is located between the Happy Home Showcase and Nook's Homes. It serves the same role as it did in Animal Forest and Animal Crossing, allowing the player to send letters to villagers, other players, and letters to player in the future and store mail in addition to also housing the Automatic Bell Dispenser (ABD), which hosts a saving account for the player and allows the player to pay off home loans to Tom Nook. The ABD will give the player interest if enough Bells are in savings.

A feature introduced to the Post Office in New Leaf is the ability to send letters to other plays via SpotPass; however, this only works if the player is currently visiting the letter recipient's town and sends the letter through the recipient's Post Office. Another new feature is the ability to "ask about a present", which allows the player to download exclusive seasonal items from Nintendo. The Post Office also announces the start of each day at 6:00 AM.

Pelly and Phyllis continue to serve as the clerks of the Post Office, which Pelly working during the day and Phyllis working at night. Pete likewise returns and can, again, be seen delivering mail around town and delivering mail directly to the player whenever Nintendo sends them mail. 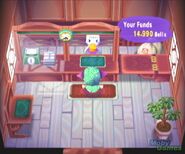 The post office interior, as it appeared in Animal Forest (taken from a fan translation).

Meeting Pelly in the Post Office in Animal Crossing.

Meeting Phyllis in the Post Office in Animal Crossing.

A player finishing their loan during the day in New Leaf.