Presents (プレゼント, Purezento?) are a way of sending gifts such as furniture, flowers, clothes, and fruit to other villagers and players in the Animal Crossing series. The present initially appears as a white box with a red bow around it, and can be opened in the player's inventory.

Presents appear in various different ways. Items sent in the mail appear as presents and are automatically wrapped when the letter is sent. Presents can also appear attached to balloons and must either be shaken out of a tree (in the GameCube games only), or shot with a slingshot.

Green presents are deliveries and are given to the player by villagers with the intention of delivery to other villagers. In the GameCube games, delivery items were unique and did not come out of presents. In New Leaf, a green delivery task present reads "For (Villagers Name)", but if the deadline is missed, it will instead read "What was this?" and cannot be delivered.

Balloons seem to float randomly over the town, but they actually originate on the edges of the map at specific times. Every time the player is outside and the time's final digit is a '4', a balloon has a chance to appear; for example, a balloon could appear at 3:14, 5:54, 12:34 or 1:04, but they will not appear at times like 4:33 or 7:28.

If shot down over water or flowers, the present will be destroyed and the player will become shocked by it. The present can also be destroyed if it lands in the center of a 3x3 pattern layout.

In GCN games, balloons with presents attached can only be obtained if they land in a tree, at which point they can be shaken out. Balloons can travel horizontally or diagonally.

A red balloon landing in a tree in Animal Forest e+.

In Wild World, presents go across the town at the north end. The player does not need to stand directly under the present in order for it to be knocked out of the sky. However, the present can only be knocked out of the sky by using a slingshot. There are a variety of different items in presents, and it is not limited to only common or rare items. In City Folk, the presents are the sole source for the Super Mario themed items, but common items can be shot down as well. The Mario items are all from the classic Super Mario Bros. game for the NES, and they are all 8-bit. Sometimes, a Golden Slingshot appear after opening a balloon present.

In City Folk, Phineas states that balloons come from the sky. This statement, however, cannot be proven. Usually, presents appear just above the player, but in Wild World, they appear on the top screen. And if a Balloon is popped over water, the player will be shocked while the present falls in the water, the player not receiving any gift.

Silver balloons in the air.

A balloon being knocked out of the sky with a net in New Leaf. 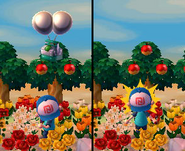 The player is shocked when the toolbox is destroyed due to no available space on the ground.

In New Leaf, floating balloons can also be popped by a Shovel, Axe, or Net but only when hit from the top of the beach cliff, as at this point they rise or descend past the player. The Balloon Series furniture is obtained from them, rather than the Mario Series that could be obtained in former games. However, once the whole set has been collected at least once, other furniture items may appear.

Popping a certain number of balloons may also cause silver balloons carrying silver slingshots to spawn too.

In New Horizons, floating balloons appear starting on the east or west of the island. These balloons can only be popped by using a slingshot. The rewards that appear in the presents vary from crafting materials, seasonal DIY recipes, and Bells (1,000 - 30,000), to clothing and furniture.

Upon popping 300 balloons, the next balloon that spawns will be golden and contain the DIY recipe for a Golden Slingshot. This golden balloon will continue to spawn every 15 balloons until the player learns the recipe.

During Bunny Day, special striped Bunny Day balloons will spawn in addition to normal balloons. These special balloons only carry Bunny Day DIY recipes and sky eggs, which are used to craft items from the Bunny Day series.

Drop rates for the various rewards depend on 3 factors: Whether the player is popping their 10th or later balloon of the day, whether there are seasonal recipes, and if there are seasonal recipes, whether the player has learned them all. This is not related to drop rates from specific colored balloons, but rather the rewards the game spawns in the first place. The rates are as follows: [1]

In Wild World and City Folk, after shooting down 15 packages a golden slingshot will float across the town. The golden slingshot is carried by either a single golden balloon (Wild World) or a group of three golden balloons (City Folk and New Leaf). In New Leaf, a silver slingshot appears after 15 packages have been shot down, carried by two silver balloons. 15 more packages have to be shot down with the silver slingshot in order for the golden slingshot to appear. The balloons all have to be burst for the tool to drop, taking one hit each. All three can be burst at once by using a net at the edge of the cliff in New Leaf.

In New Leaf, more silver slingshots can appear after the first sliver slingshot. However, it is unlikely another golden slingshot will appear if lost, like all golden tools.

Wrapping Paper (also known as Wrap) is a new type of present item in New Leaf. Wrapping paper can be bought for 160 Bells and can be found at a Nookling Store. Before being used, wrapping paper appears as a roll of paper with an orange outside and a yellow-green inside. Once used to wrap an item, the wrapped item appears as a gold colored bag with a red ribbon. It is mainly used for giving a present to a villager on their birthday.

A present to deliver.

A balloon with a present attached.

A player watching a Balloon Present float by.

A player watching a Balloon Present float by.

A player about to shoot a balloon

A player shooting down a present in City Folk.

A Present Balloon floating by.

A red present, a green present and a wrapped (gold) present

A delivery present if the player forgot to deliver it.

Nook Miles activity if a balloon was popped above a river.