“You don't mind if I sharpen my claws on your bed, do you?”
― Picture quote, Wild World

Purrl (たま, Tama?) is a snooty cat villager in the Animal Crossing series. She has appeared in all games from the Animal Crossing series to date apart from Pocket Camp. Her name is a combination of "purr", which is a sound that cats make, and the gemstone that is prized for its elegance and shine; the pearl. Her Japanese name, 'Tama', is a common name for housecats in Japan. Calicoes have a myth of being a lucky type of cat, so this may relate to the opinion of her being wealthy. Her Wild World picture phrase is a reference to real cats scratching beds and sofas. Her initial catchphrase is a reference to a kitten, a baby or young cat.

Purrl has the overall appearance of a calico cat, which means she is tri-colored in black, white, and various colors of brown (medium and dark). She has a cobalt blue color inside her ears, and well-defined lower eyelashes which are similar to Mint's eyes. Her eyes always appear to be looking upwards and she has a smiling mouth. Other than eyelashes, Purrl lacks feminine features, so she can easily be mistaken for a Normal/Uchi villager or even a male. Purrl's initial clothing has changed throughout the series. In Animal Crossing she wears a Deep Blue Shirt. In Wild World and City Folk she initially wears the Asian Shirt. In New Leaf, Purrl initially wears the Periwinkle Tee. On rainy days, she carries the red dot umbrella, which is red with white polka dots on it.

Purrl has a snooty personality, which means she loves make-up and gossiping. As a snooty villager, Purrl will first appear rude and arrogant towards the player, often talking about herself and her own experiences. She also speaks about the style and appearance of other villagers, usually other female villagers such as normal, peppy, and other snooty villagers. She will soon warm up to the player, confiding in them about their own feelings but still keeping subtly rude. Purrl will not get along with lazy villagers due to them not caring about their appearance or the lazy villagers hating what she eats, and she won't get along with jock villagers because they will question her on her physical appearance and they won't worry about fashion. However, she will get along with cranky villagers due to their similar rude personalities, and usually normal villagers as well.

Purrl's house has a very sophisticated theme in Animal Forest and Animal Crossing. Her house has the Perfect Painting and various items from the Exotic Series. She also has two Fizzoids, and a Bird Cage. Purrl has the Concrete Wall and the Checkered Tile in her home. She also has a Hi-Fi stereo. In every game, her favorite song is K.K. Swing.

In Wild World, Purrl no longer has the Perfect Painting or the Caladium, but retains many furniture items first found in her original house. Purrl now has an Exotic Screen and a Cabana Bookcase, but does not have the Mini Fizzoid. She still has the Concrete Wall and the Checkered Tile.

In City Folk, she retains many of the new additions introduced in Wild World, but no longer has a Hi-Fi Stereo, replacing it instead with a Corn Plant. The wallpaper and floor are the same as they were in previous two games.

In New Leaf, Purrl's house appears to be more different from the previous versions. It now has a modern Asian theme. She replaced the Concrete Wall with the Exquisite Wall, which gives her home a more comfortable feeling than the old wallpaper. Furthermore she added more furniture items from the Classic Series: the sofa, the bed, and the table, which has an Azalea Bonsai on it. She still owns the Exotic Screen and gains an Exotic Table with a Tea Vase on its top and an Exotic Wall Shelf as well. To fill up the room, there is also a Croton, an Antique Clock, a Retro TV and a Hi-Fi Stereo. Purrl also has a new Gyriod, a Strumbiod. 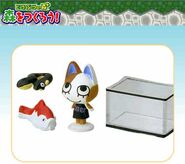 Purrl is featured in this figurine seat, with a koi, an eel, and a large fish tank.
Add a photo to this gallery
Retrieved from "https://animalcrossing.fandom.com/wiki/Purrl?oldid=398359"
Community content is available under CC-BY-SA unless otherwise noted.