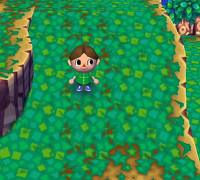 Ramps or inclines are a type of geography that will appear in all Animal Crossing series games except in Wild World, where the town only has one level. As its name implies, a ramp is a sloping piece of land, usually covered in grass, that connects the higher and lower parts of town. Because it is sloped, it causes sport balls and snowballs to roll down, making it hard to bring them up ramps. Each town has two ramps, with one on each side of town in Animal Crossing and City Folk; in Animal Crossing, it is possible for the town to have three layers, which makes the maximum number of ramps per town six. In New Leaf, there are also two ramps, but they are only used as a transition between the town and beach. In New Horizons, the Deserted Island always has three layers initially, but no ramps, and all ramps must be funded and built by the player after Resident Services is upgraded to a building.

Clovers, weeds, flowers, items, and cracks can be placed or appear on the ramps in some games. They are often used as a strategy to catch a tarantula or scorpion. When someone is following the player in New Leaf, like Katie, Tom Nook, or Isabelle, they will ask if the player wants them to stop following, as there is no good reason to take them to the beach.

There are fourteen known ramp styles in City Folk, which are as follows: 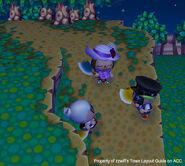 In New Leaf, there are only two ramps in every town, that both lead down to the beach. They can be far from or near to each other, and be parallel to the cliff they lead down from or perpendicular.

In New Horizons, there are eight ramp styles, all of which are either ramps or staircases. All styles are unlocked once Resident Services is upgraded from a tent to a building. To create a ramp, the player must speak to Tom Nook about infrastructure, then select "Inclines". The player can then choose the style of incline they want, and place the construction plot anywhere on their island where there is an even stretch of cliffs. Lloid will appear with the plot and accept donations for the incline's construction, and when the required funding has been donated in full, the incline will be completed the next day.