watch 03:41
Wiki Targeted (Games)
Do you like this video?
Play Sound

Re-Tail Theme
Re-Tail is a new store introduced in New Leaf. The store is run by two alpacas, Reese and Cyrus, who also make their debut appearance. It is one of the initial stores in the game and is located outside of Main Street, away from the other stores.

Reese serves a role similar to Tom Nook in previous games, and buys items off the player for their full value. A chalkboard sign outside the store lists premium items which can be sold to Reese for double the value. There is usually only one item on the board unless the wealthy town ordinance is enacted (which will increase the list quantity by 1), or if several people have been tagged through StreetPass.

The player can additionally buy and sell items present in the store in the form of the flea market. There are 8 slots in total, 4 in the middle and 4 near the top-left of the store. Interacting with any slot will prompt Reese to ask the player to place something in the flea market. An empty slot can be occupied by any applicable sellable item (except bugs, fish, and exclusive Nintendo items), and the price of the item can be adjusted between 1 bell and ~99,999 bells. If the player accepts the request to sell an item, Reese will then place the pricetag on the presented item, and the selected slot will be occupied by said item. Once the player interacts with any item presented in the store, they may buy the item, and it will state the previous owner of said item. If they previously owned it, they can choose to adjust the existing price or take it home for free.

Reese is also the contact for the stalk market and states the current market value of turnips both in the morning and when the prices change after noon. She buys turnips according to these prices. Unlike Tom Nook, Reese charges the player for disposing of trash items.

Cyrus, the blue alpaca, is the upholster and is in charge of altering furniture. He is initially unavailable until the following conditions are met:

Cyrus can customize furniture with pre-selected designs, clothing, or custom patterns. Certain furniture items can be also be customized using ore, which gives them a shiny metallic or crystal appearance depending on the ore involved. Additionally Cyrus can create the following unique items not available anywhere else:

It takes Cyrus 30 minutes to complete a furniture request, and he will accept unlimited requests per day. However, he will not take requests if the store closing time is exceeded.

Timmy in Re-Tail, when you first walk in for the first time.

Cesar purchasing an item on display.

The player speaking to Frita in Re-Tail.

Selling a whale shark to Reese

Selling multiple items to Reese where all of them are premium

Cyrus with a completed customized bed 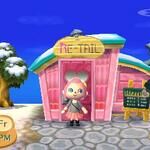 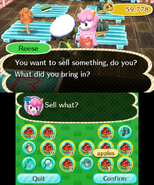 The entrance mat of the Re-Tail.

Re-tail at night during the winter.

Re-Tail during closure time at night
Add a photo to this gallery
Retrieved from "https://animalcrossing.fandom.com/wiki/Re-Tail?oldid=563722"
Community content is available under CC-BY-SA unless otherwise noted.