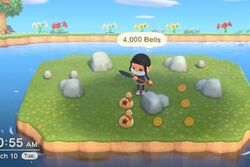 In towns, on islands

Animal Forest,
Animal Forest+,
Animal Crossing,
Animal Forest e+,
Wild World,
City Folk,
New Leaf,
New Horizons
Rocks, also known as giant rocks, are natural objects that appear in every Animal Crossing series game. Permanent rocks are impassable and cannot be destroyed, although in Animal Forest e+ one rock can be removed for a single day in order to access the Resetti Surveillance Center. Later games such as New Leaf and New Horizons feature destructible rocks. Rocks are randomly generated at town creation, and vary in number from 5 to 10.

As rocks are solid objects, items cannot be dropped on the space they occupy, and nor will tree saplings grow on or adjacent to them. In New Leaf they obstruct Public Works Projects; the Welcome amiibo update added the ability for the player to sit on rocks.

Three species of bugs occur in rocks: pill bugs, centipedes, and house centipedes. These bugs, if present, are only revealed if the rock is struck with a shovel or axe.

Once a day, one random rock in the player's town or island is generated as a money or "bell rock". Bell rocks are identical to regular rocks except that when struck, they will drop Bells in exponentially increasing amounts into adjacent spaces. After a rock has been struck, there is a 10-second limit to knock out as many bells as possible. At the end of that period, the rock will cease dispensing any bells for the day. The number of bells dispensed by a bell rock varies between games.

In older games, the bell rock would turn red after being struck and remain red until the end of the 10-second period. In New Leaf, when a money rock is initially struck with a silver or gold shovel all bell drops may be replaced with ore instead. In New Horizons, there is a 5% percent chance that you get a money rock island after you upgrade the Resident Services building upgrade. 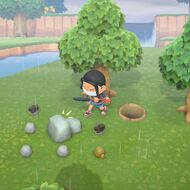 In New Leaf, a single "fake" rock will generate randomly in the town each day. This rock is identical to normal rocks but is often recognized as it occupies an empty place where a rock was previously not found. When struck with a shovel or axe this rock will shatter and drop a random ore.

In New Horizons, the Deserted Island begins with a total of 6 rocks that are all destructible. Five of these rocks will produce four different crafting materials when struck: stone, clay, iron nuggets, and very rarely gold nuggets. Striking the rock causes the player to be knocked backwards, limiting the number of hits where the rock will produce a material. If the player faces the rock with one or more obstacles (such as holes or Trees) behind them, they will be able to hit it more quickly, and extract more materials. During special events such as Bunny Day, these rocks may also produce other materials. The sixth rock is always a bell rock. If the player consumes a piece of fruit and destroys a rock using a shovel or axe, the broken rock will leave behind a single unit of stone; another rock will then be generated elsewhere on the island the next day. If multiple rocks are destroyed, one new rock will continue to be generated each day until the limit of 6 rocks is reached.

All rock types in New Leaf