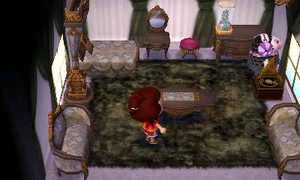 The Rococo Series (ロココシリーズ Rokoko Shirīzu?) is a series of furniture in New Leaf.

The items of furniture are themed after the Rococo period of European art, with dark wooden legs and features, and gray patterned fabrics. The bed is double-sized, with a large wall-sized headboard and a canopy.

As all of the furniture items (with the exception of the candlestick) are spotlight items in the Nookling Stores, this series is difficult to collect and is sought after by players. They can also be obtained from other villagers on occasion, or by wishing on shooting stars during meteor showers, after which they are sent randomly to players by Wishy the Star. Cyrus can refurbish items in this series into [gothic] yellow (and blue), [gothic] black (and purple) or [gothic] white (and pink).

Rococo items shown at an angle in a person's house.