“I've got my eye on you, bucko!”
― Picture quote, Wild World

Roscoe (シュバルツ, Shubarutsu?, Schwartz) is a cranky horse villager in the Animal Crossing series. He is also the only horse with a cranky personality. His initial phrase, "nay", is the sound a horse makes, commonly spelled "neigh". The reason for it being spelled as "nay", which also means "no", may refer to his cranky personality. He first appears in Animal Forest e+, as an exclusive, and subsequently in Wild World and City Folk. Roscoe also shares his name with the award winning jockey, Roscoe Goose. His Japanese name, Schwartz, means 'black' in German, reflecting the color of Roscoe's skin.

Roscoe is a black horse with a dark gray mane and his eyes are red with small black pupils. The inside of his ears are dark purple. When narrowing his eyes, his scleras turn yellow. He initially wears the checkered shirt, which matches his initial house theme. He resembles the villager Mathilda. He will sometimes use patterns, and wear them, made by the player in Able Sisters. He resembles a knight from chess.

In Animal Forest e+, Roscoe has the same house as Rolf the tiger's, only that he has changed the wallpaper and the flooring which is the Lattice Wall and the Checkered Tile. K.K. Dirge is played on a Gold Stereo with two Bowtoids.

In Wild World and City Folk, Roscoe's house has a modern theme, featuring many items from the modern series. Roscoe also has two chess pieces in his room - the white knight and black knight. Knights in chess are represented by horses, a reflection of his species. He also has a baby bear which, to some, seems out of character for a cranky villager. In Wild World, he has a plant, a petrol thing, a modern lamp and modern sofa, a white chess piece and a candle. If he has a stereo, it will play K.K. Dirge. In City Folk, he has a modern sofa.

In New Leaf, Roscoe's house is furnished mostly with items from the Sleek series, along with a weeping fig plant, and a metal guitar with an amp.

Roscoe moving into someone's town.
Add a photo to this gallery

Have you ever seen a dark-red eye floating in the night sky? Yeah, that was just Roscoe.

At level 7 friendship, he will reward you with a checkered tee and sparkle stones (x1).

At level 15, he will request that you craft a weight bench.

At level 20, he will reward you with pic of Roscoe and sparkle stones (x1). 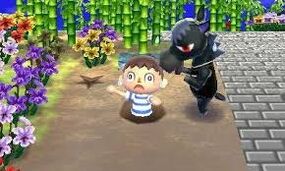 Roscoe attentive with a Villager in a pitfall. 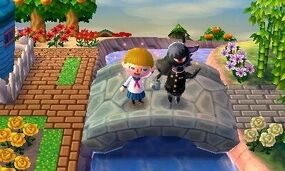 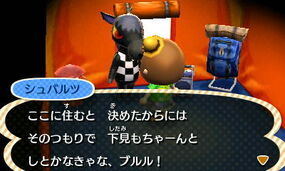 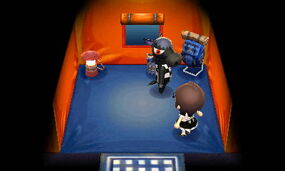 Roscoe camping out at a villager's camping site. 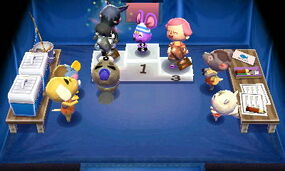 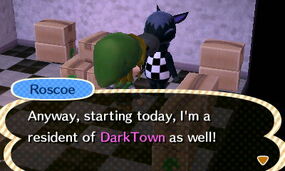 Roscoe moving into a player's town. 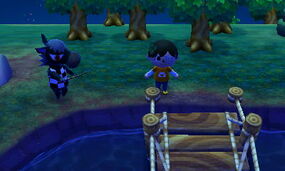 Roscoe fishing
Add a photo to this gallery

Roscoe at school being a teacher!

Add a photo to this gallery
Retrieved from "https://animalcrossing.fandom.com/wiki/Roscoe?oldid=398716"
Community content is available under CC-BY-SA unless otherwise noted.