Bottom of the Ocean
800 Bells

May to September
All day

"I got a sea urchin! Wasn't even 'earchin for it." —New Horizons

The sea urchin (ウニ Uni?) is a benthic creature introduced in New Leaf. It appears as a small, slow-moving shadow. It can only be captured by diving.

"Sea Urchins are a close relative of both the starfish and sea cucumbers and are assumed to be stationary. In actuality, they are capable of walking thanks to the many skinny legs they have between their spikes. They feed on seaweed on the ocean floor using their strong mouths located on their undersides. They are rich in nutrients but also have a lot of cholesterol, so take care not to eat too much."

In New Horizons, upon donation or selecting "Tell me more about this!", Blathers will say:

"Ah, the sea urchin...the unabashed goth of the ocean floor! Indeed, with its mane of dark-hued spikes, it looks for all the world as if it might front a punk-rock band. Perhaps its more demure relatives—the sea cucumber and the sea star—disapprove of its outlandish look? It would certainly explain why sea stars gobble up sea urchins every chance they get! But worry not for our spiky friend. Its venomous spines are an effective deterrent to many a predator."

"I got a sea urchin! And I didn’t poke myself, either!" —New Leaf

"I got a sea urchin! Wasn't even 'earchin for it." —New Horizons

Sea urchins are spiky animals found in the ocean, they are known to prickle people and there are 950 species of them. Sea urchins are members of the phylum Echinodermata, which also includes sea stars, sea cucumbers, brittle stars, and crinoids. 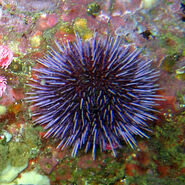 Sea urchin in New Horizons.
Add a photo to this gallery
Retrieved from "https://animalcrossing.fandom.com/wiki/Sea_urchin?oldid=516014"
Community content is available under CC-BY-SA unless otherwise noted.