October to July (North,NH)
April to January (South,NH)
All day

"I got some seaweed! I couldn't kelp myself!" —New Horizons

Seaweed is a deep-sea creature found at the bottom of the ocean in New Leaf and New Horizons. It is indicated by a large, stationary circular shadow. Diving is the only way of capturing it.

Though not obtainable in-game, seaweed is present in the seawater tank of Animal Crossing's museum.

"Seaweed can be over three feet long. When its spores attach to rocks, they take root and grow. Seaweed is naturally brown but turns to the dark-green color we associate it with when cooked. It tends to spoil easily when picked, so various preservation methods have been developed as a necessity. Such methods of preservation are sprinkling ash and drying it out, or boiling it and adding salt."

When placed, it will appear directly on the groud rather than in a tank.

In New Horizons, upon donation to the museum or selecting "Tell me more about this!", Blathers the curator will say:

"Let it be known that seaweed is a misnomer of the highest order! That is, it is not a noxious weed so much as it is a marine algae most beneficial to life on land and sea. Seaweed, you see, provides essential habitat and food for all manner of marine creatures. And it creates a great deal of the oxygen we land lovers love to breath too, hoo! And yet, I can't help but shudder when the slimy stuff touches my toes during a swim. Hoot! The horror!"

"I got some seaweed! I [just] couldn't kelp myself." —New Leaf and New Horizons

The species of seaweed in Animal Crossing is known as wakame and is commonly used in cooking. It has a subtly sweet flavor and is most often served in soups and salads. In English, it is also known as sea mustard. It is native to cold temperate coastal areas of Japan, Korea, and China. In recent decades, it has become established in New Zealand, the United States, France, Great Britain, Spain, Italy, Argentina, and Australia. It was nominated one of the 100 worst invasive species in the world. 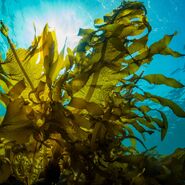