Animal Crossing Wiki
Register
Don't have an account?
Sign In
Advertisement
in: Image requested, Articles in need of cleanup, Tool

Animal Forest,
Animal Crossing,
Animal Forest e+,
Wild World,
City Folk,
New Leaf,
New Horizons
Shovels are a type of tool that have been available throughout the Animal Crossing series. They are used to dig up buried objects in the ground such as Pitfall Seeds, Gyroids and Fossils. Shovels can also be used to hit rocks which may spawn new bugs or be a Money Rock.

Shovels are used to dig up fossils marked on the ground by a small crack (star shaped). They are also used to dig up other items, such as pitfall seeds and other buried objects. Shovels are the intended tool to use on rocks to find and exploit money rocks for Bells or ore. Likewise, a hole created by a shovel can be used to bury fruit and bamboo shoots to grow trees and bamboo, or time capsules and other objects to hide them.

Shovels are also the only way of removing stumps after a tree has been cut down using an axe. Likewise, they are used to remove bushes. Digging where a flower is planted will destroy the plant.

Holes dug by shovels can also be used to plant saplings, and plant and replant flowers, despite also being able to do this directly by hand.

A shovel can be used to dig a hole in any location where there is no obstacle blocking the ground, like patterns and houses.

In Animal Forest, Animal Crossing and Animal Forest e+, the golden shovel was introduced to the series and can be obtained by completing a task. The player has a chance of digging up 100 Bells from anywhere on in the ground.

In Wild World, the gold shovel was made easier to obtain than in any other game.

In City Folk, the silver shovel was introduced to the series and can be obtained by completing a task. The gold shovel retains the same obtainable features as in Wild World.

In New Leaf, the method of getting the golden shovel has changed. Now the player must upgrade the Nookling Store to T&T Emporium and buy at least 50 fertilizer bags. The gold shovel retains the same abilities as in City Folk.

In New Horizons shovels are primarily crafted and all have limited uses. Shovels do not wear down from digging empty holes or refilling empty holes, but will wear down when digging up flowers, trees, fossils, or other buried goods.

First stage of growth (sapling form). This only happens in AC and AFe+. 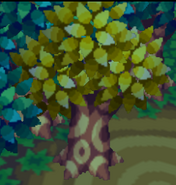 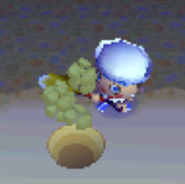 Trying to dig a stone road In Wild World. 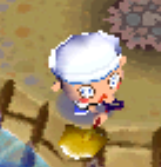 Attempting to dig a pattern.

Attempting to dig a flower bed.

Digging up all 9 bells from a money rock

A silver shovel revealing hidden Ore instead of the daily money.

This section is incomplete. You can help by expanding it by uploading images of using the shovel.

Digging up items with a shovel in New Horizons