Smug (ボク Boku, or キザ Kiza) (Sometimes called Prideful or Charming) is a personality introduced in New Leaf. They are very polite, kind, and gentleman-like, and will easily get along with other villagers. They seem to be a mix between all personality types and are lively, kind, and positive, but may come off as conceited. In HHD, smug villagers tend to have a bigger ego and talk about how much they're cool most of the time and cooler than everyone else. In the Happy Home Paradise expansion to New Horizons, they appear to be into music, as they will bring up how their roommate can't sleep due to them incessantly blasting music at night, if they have one.

Smug villagers talk about logical stuff that other people do, give life advice, and practice foreign languages. They are also aware of their catchphrase.

They generally get along with peppy, snooty, normal, lazy, jock and other smug villagers, but may conflict with cranky and sisterly villagers.

The following is a list of villagers who have the smug personality in their latest installments of the Animal Crossing series games. 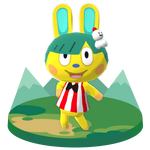