April to September
All year (NH)
All day

Scarce (★★★★)
The snail, Helix pomatia, is a small mollusk that can be found moving slowly across flowers, shrubs, and rocks during rainy weather. When caught it hides within its protective shell. In the GCN games, snails do not flee, but from Wild World onwards the snail will retreat into its shell, fall to the floor, and disappear. Snails are the only bugs in the series to not be in the "Arthropoda" Phylum.

As with all bugs in the Animal Crossing series, the snail can be donated to the Museum, by talking to Blathers who will give the player a small talk about it.

"Let me make one thing perfectly clear: snails are not insects. Snails are members of the mollusk, wot! They are related to oysters, clams, and more obviously to slugs. It's a well-known fact, you can't pick your relatives. Snails have soft bodies, which are protected by hard shells, and their eyes are on the tips of their tentacles. I've pondered from time to time, if one pulled a snail from its shell, would it then become a slug? Blech! The very thought of touching that slimy, mucous-covered body... Most foul! Utterly nauseating!

"I should inform you, some cultures consider snails a delicacy... That means that someone, somewhere, would eat this. How I fear for that person."

After donation, the snail can be found on the pink cosmos nearest to the pond in the exhibit on the left of the first room of the bug area.

"Ah, if you didn't know, here's a fact for you... Removing a snail's shell doesn't make it a slug! If you did try to pull off a snail's shell-- which I surely DO NOT condone-- its insides would spill out... I... Just got a mental picture of that. I fear I shall never eat again!"

Snails can be found on the upper terrace of the bug exhibit, on the flowers to the right-hand side.

"Snails are mollusks that live on land and are related to shellfish like clams and oysters. One snail can play the role of both a male and a female, so it can lay eggs all by itself. Newly hatched snails already have a tiny shell, so right from birth they are easily identified. Most species have clockwise spirals on their shells, though spirals that go counterclockwise are possible."

The snail can be found in the upper right room of the bug exhibit, on the blue hydrangea bush behind the tree stump.

"Snails are not insects, I'll admit. But they're just as revolting to me. Snails are mollusks, you see, and are born wearing shells they cannot remove. Instead, their shells get bigger and bigger as they grow. Hoo! They must get heavy, don't you know! I suppose that's why they need a trail of mucus to move about. A truly foul form of transportation."

A snail on a Jacob's Ladder

A group of snails in City Folk.

A snail resting on a hydrangea bush in New Leaf. 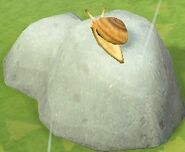 A snail on a rock in New Horizons.
Add a photo to this gallery

Helix pomatia, also known as the edible snail or escargot, is a species of snail that is sometimes farmed for eating. It is found throughout Europe but was introduced to Britain by the Romans. They are also used in many restaurants in Europe, such as France.

Retrieved from "https://animalcrossing.fandom.com/wiki/Snail?oldid=496930"
Community content is available under CC-BY-SA unless otherwise noted.