The Snowman Series consists entirely of snowman-themed furniture. All furniture is classified as "white" by the Happy Room Academy, although it may also contain small areas of yellow, black, and red. The face of a snowman also appears on all but one of the items. The snowman series can be obtained in Animal Crossing, Wild World, City Folk, and New Leaf.

A piece of furniture from the snowman series can only be obtained after building a well-proportioned snowman from snowballs that are dotted around town from mid-December through to mid-February. After being built, the snowman will comment on his appearance. If the snowman is well-built, a letter will arrive containing an item of furniture and a short note of appreciation.

All the pieces in the snowman series can be sold for 8,888 Bells and are awarded 888 points in HRA evaluations. This use of this number was intended as "8" is similar in shape to a snowman. As is usual with themed items from special characters, items in the Snowman Series cannot be purchased at Tom Nook's. 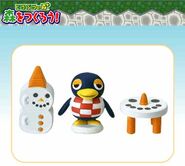 The Snowman Table and Fridge feature in this play set.
Add a photo to this gallery

The series in Happy Home Designer

Add a photo to this gallery
Retrieved from "https://animalcrossing.fandom.com/wiki/Snowman_series?oldid=388839"
Community content is available under CC-BY-SA unless otherwise noted.