watch 03:19
Wiki Targeted (Games)
Do you like this video?
Play Sound

Sports Fair Themes
The Sports Fair is an event that features only in Animal Forest, Animal Forest+, Animal Crossing, and Animal Forest e+. There are two fairs - the fair in Autumn takes place from September 23rd to September 24, while the one in the Spring is set from March 20th to March 21.

Tortimer, the mayor, is present at the events, which take place around the Wishing Well. After speaking to Tortimer, the player will receive a medal which can be placed in their home. Each event has its own music, which replaces the hourly music in the surrounding acres. All participating villagers wear white outfits - girls have a pink stripe along the side, while boys have blue stripes.

At 9 in the morning, Copper heads an aerobics session that four villagers participate in, mimicking his actions. The player also can participate, using the C Stick to control the motions. Occasionally, villagers will lose their place and start to panic. The event ends at 11 in the morning.

The ball toss is the third event in the sports fair, starting at 1pm and ending at 3pm, two hours later. Two teams of two villagers will repeatedly throw balls into a net, while another villager will cheer on both teams. Many of the villagers are confused by this sport, while others will find it pointless.

The final event in the sports fair is the tug-o-war, which goes for two hours starting at 3pm. Two teams of two pull a long rope across a red line, while a fifth villager waves a red flag enthusiastically at them. 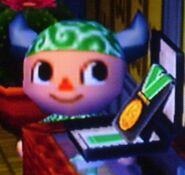 Tug-o-War
Add a photo to this gallery

Retrieved from "https://animalcrossing.fandom.com/wiki/Sports_Fair?oldid=559477"
Community content is available under CC-BY-SA unless otherwise noted.