watch 02:48
The Loop (Games)
Do you like this video?
Play Sound
This article is a stub. You can help Animal Crossing Wiki by expanding it.

"I did it! I caught a stag beetle! I bet he's fun at parties!" —Wild World

The stag beetle (ヒラタクワガタ, Hirata-kuwagata?) is a gray nocturnal stag beetle. Before Wild World, it was known as the flat stag beetle. It is uncommon, though easy to find, and sells for 2,000 Bells. It is found on trees along with its cousins, the Saw Stag Beetle, the Mountain Stag Beetle and the Giant Beetle, and is the most common of these four, especially from 6-8am. In City Folk, it was replaced by the Miyama Stag Beetle.

As with all bugs in the Animal Crossing series, the stag beetle can be donated to the Museum by talking to Blathers. During the donation, he will tell the player a little bit about it.

"They're called beetles, wot? The lugs of the insect world. Insects with armor plating their backs, you know. Their armor, it... opens up, revealing wings. Featherless wings. Which they use to fly! It's really quite unnatural. Then, there's that thin, membrane-like covering where their heads connect to their bodies. Most foul!"

Blather's comment is as follows: When picking up a stag beetle, I would advise you to grab it on it's back side. If your finger got stuck in the brute's pinchers, you'd surely regret it, wot wot!

"Yes! I caught a flat stag beetle! I have to celebrate! I know! I'll throw a flat-stag party!" —Animal Crossing 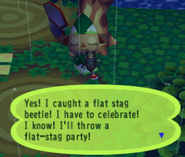 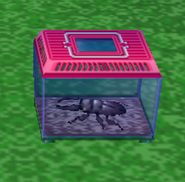 Flat stag beetle in a players house in Animal Crossing

Flat stag beetle in the Museum in Animal Crossing

the palawan stag beetle is a subspecies of the flat stag beetle.
Add a photo to this gallery

The Hirata Stag Beetle, called hirata-kuwagata (ヒラタクワガタ?) in Japanese, is a variable species, with no two beetles having the same mandible shape. It has many subspecies and is endemic to asia.The subspecies of indonesia and phillipines are large This is an area where many of the Dorcus titanus beetles have to coexist with the giant and violent Asian Chalcosoma rhinoceros beetles, such as the Caucasus beetle. It may be for this reason that the Dorcus titanus beetles needed to grow larger to compete for shelter and food against these other giant beetles.

Retrieved from "https://animalcrossing.fandom.com/wiki/Stag_beetle?oldid=526026"
Community content is available under CC-BY-SA unless otherwise noted.